National Catholic Register: Disorder in the Order of Malta? 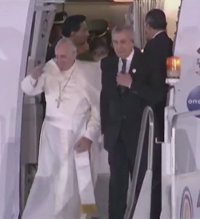 VATICAN CITY  The dismissal of a senior figure in the Sovereign Order of Malta over the distribution of contraceptives in parts of the developing world has provoked a serious rift between the Knights of Malta and the Holy See, but one both parties hope will be swiftly resolved.

The dispute, which has led to a controversial intervention by the Holy See, has exposed a divergent approach to dealing with practices that the Church has always taught to be gravely immoral. It has also revealed allegations of ambitions of the Knights German association to extend its influence within the ancient chivalric order, a papal wish to rid the order of Freemasonry, and a mysterious 120 million Swiss Franc ($118 million) donation to the Knights.

The Sovereign Military Order of Malta is a lay religious order headquartered in Rome dating back to the First Crusade. It has long defended the faith against persecution and been dedicated to helping care for the poor, the sick and the vulnerable, employing about 25,000 medical personnel and 80,000 volunteers worldwide. It is considered a sovereign subject under international law and has diplomatic relations with 106 countries.

American Cardinal Raymond Burke is the orders cardinal patron, whose task it is to promote relations between the Holy See and the Knights and to keep the Holy Father informed about spiritual and religious aspects of the order.

The ongoing wrangle, which Vatican Secretary of State Cardinal Pietro Parolin has described as an unprecedented crisis, first became public after the grand master of the Knights of Malta, Fra Matthew Festing, dismissed Albrecht Freiherr von Boeselager as grand chancellor (the orders third-ranking official) on Dec. 6, accusing him of being ultimately responsible for the distribution of contraceptives through the orders humanitarian agency, Malteser International.

Despite having taken a promise of obedience to the grand master as a knight of the Second Class, the long-serving German-born knight refused to step down at the Dec. 6 meeting, an act of insubordination that the order called disgraceful and which prompted a disciplinary procedure that suspended Boeselager from all offices of the Knights of Malta, according to a Dec. 13 statement. The Order of Maltas constitution states that obedience in the order involves the obligation to execute any instruction as lawfully given by the superior, dependent on the motivation of that instruction.

The reasons for Boeselagers dismissal primarily date back to when he was grand hospitaller from 1989 to 2014 and in charge of Malteser International, the Knights large humanitarian aid agency located in 24 countries. During his tenure, the organization is documented to have distributed thousands of condoms and oral contraceptives, mainly but not exclusively to help prevent prostitutes in the Far East and Africa from contracting HIV/AIDS.

They were giving the condoms not only to patients, but also to aid workers in general, an informed source told the Register on condition of anonymity. The ostensible motivation was to prevent the spread of AIDS, and then, in general, as a program for family planning, too  birth spacing and that kind of thing, which you can hardly say had to do with AIDS.

At the end of 2014, the grand master became aware of the issue; and in May of 2015, Fra Festing appointed a three-person commission to find out what happened. The commission produced its findings in January 2016; the issue of contraceptive distribution has been further catalogued more recently by the Lepanto Institute, showing that thousands of contraceptives were issued from 2005 to 2012.

Boeselager had been aware of the issue for some time and was first informed of this situation at least since 2013, when he held the position of grand hospitaller, or from when Malteser International had ordered a comprehensive evaluation of all projects regarding their conformity with the teaching of the Catholic Church, said Eugenio Ajroldi di Robbiate, communications director for the Knights of Malta. Since the end of 2014, and up until December 2016, there have been numerous occasions when the grand master and Albrecht Boeselager had discussed the affair.

The spokesman underscored that the commission recognized the professionalism of Malteser International and the importance of its projects in 24 countries around the world, stressing that those who have raised a moral issue were limited to Myanmar, Kenya and South Sudan.

In a Dec. 23 statement, Boeselager protested that there were no valid grounds to resign and that an established procedure for his removal wasnt followed. He also criticized an instruction from the grand master, saying his directive that members not in agreement with his decision should resign was reminiscent of an authoritarian regime.

On the contraceptive issue, the former grand chancellor said the distribution of condoms in Myanmar to prevent the spread of AIDS was initiated at a local level and without the knowledge of Malteser International headquarters. As soon as the order learned of the condom distribution, two of the projects were immediately halted. A third continued, he said, because an abrupt end to the project would have deprived a poor region of Myanmar of all basic medical services. That project eventually ended after the Congregation for the Doctrine of the Faith intervened.

Boeselager said that he has always stressed most clearly that he feels bound by the teachings of the Church and that to contrive an accusation that he did not acknowledge the Churchs teaching on sexuality and the family, based on the events in Myanmar, was absurd.

However, an Austrian component of Malteser International continues to advocate condom use to prevent HIV infection on its website, even though the Church teaches the use of contraceptives is gravely immoral in any circumstances.

Hopes that the contraceptive scandal would be addressed came on Nov. 10, when Cardinal Burke was received in private audience by Pope Francis. During that meeting, the Register has learned, the Pope was deeply disturbed by what the cardinal told him about the contraceptive distribution. The Pope also made it clear to Cardinal Burke that he wanted Freemasonry cleaned out from the order, and he demanded appropriate action.

The concern was followed up by a Dec. 1 letter to Cardinal Burke, in which the Register has learned that the Holy Father underlined the cardinals constitutional duty to promote the spiritual interests of the order and remove any affiliation with groups or practices that run contrary to the moral law.

The Holy Father did not explicitly ask in the letter that Boeselager be dismissed, and, contrary to reports, Cardinal Burke has insisted that he would never have told Boeselager that the Pope had specifically asked for his dismissal. Rather, inside sources are at pains to point out that the Knights leadership could not see how the matter could be otherwise rectified, when great scandal was involved and no one was taking responsibility for it. The leadership believed it was clear that Boeselager was principally responsible for what had happened, especially when, during the Dec. 6 meeting, he gave no reply when asked why he did not formally protest the accuracy of the commission report.

A reliable source also recalls Boeselager saying at a reception in Rome in 2014: We have to give contraceptives to the poor or they will die. Boeselager also reportedly did not reply when confronted with this remark at the Dec. 6 meeting.

The Knights leadership, including Cardinal Burke, were convinced that a grave violation of the moral law had been verified, and especially as it had been going on for a period of time, the persons responsible had to be disciplined; otherwise, the institution would lose its credibility.

Boeselager did not respond to a request from the Register to comment on matters related to his removal.