The year after President Andrew Jackson left office, the majority of the Cherokee people were forced from their ancestral homeland and escorted to current day Oklahoma, then the frontier of American civilization, on what became known as the "Trail of Tears."The 1838 forced removal of the Cherokee Nation from their homeland. The Cherokee, like all other Indian tribes east of the Mississippi River, had been under heavy pressure to give up their lands in the east in exchange for lands in the west. Bitterly opposed by the tribes, this "Indian removal" policy was nonetheless implemented by threats and coercion. The removal of the Indians opened new territories for white settlement and allowed white farmers free to fulfill the dream, outlined by Jackson in 1830 in a message to CongressAn excerpt from Jackson's speech in support of Indian Removal., of an "extensive Republic, studded with cities, towns, and prosperous farms, occupied by more than 12 million happy people, and filled with the blessing of liberty, civilization, and religion."

"What sort of hope have we from a president with an inclination to disregard laws and treaties? We have nothing to expect from such a president."
ùElias Boudinote, the Cherokee Nation

Like Jefferson before him, Jackson regarded the expansion of independent, white farmers as the key to the continued success of the United States. So important was this goal to Jackson, that he slighted the accomplishments of the Cherokee Nation, and defied a Supreme Court ruling An excerpt from the Supreme Court decision favoring the Cherokee. that recognized the Cherokees' right to remain on their lands.

In 1830, Congress narrowly passed the Indian Removal ActThe act empowered the president to negotiate removal treaties with Indian nations. , which funded and legalized what essentially produced the forced, westward migration of Native Americans. Historian Kathryn Braund recognizes the importance of the Act to Southern politicians and landowners: "In order to keep expanding the cotton and slave economy, Americans needed Indian land."

Many white Americans had deep-seated fear of Native Americans, in part because earlier Indian hostilities against white settlers by Indians had received enormous publicity for decades, while brutal treatment of Native Americans by whites had been ignored. Many whites completely ignored the fact that the Indians of the southeast had adopted many ideals of the dominant culture, including literacy and Christianity-as well a commercial agriculture and race-based slavery. When they were removed from Georgia, a far higher percentage of Cherokees could read and write than could the white settlers who took their land. What many Americans seemed to fear and resent most was lack of access to prime agricultural land that, under Indian sovereignty, would forever remain beyond their reach. And what many Americans seemed to respect the least was their own constitution and the rights of a culturally distinct minority. 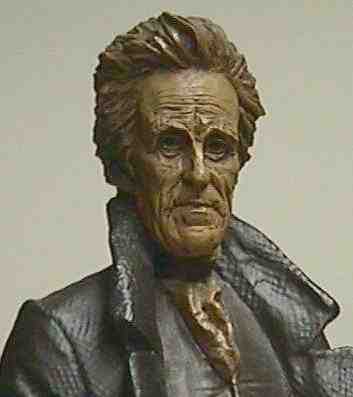 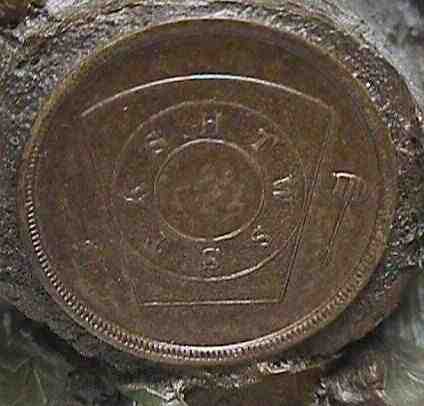 Brother Andrew Jackson was the seventh president of the United States. In this signed and numbered sculpture by T. Clark he is standing before an "Old Hickory" branch which was a nickname bestowed upon him during the War of 1812 by soldiers who declared him "tough as hickory." The coin on the branch's cut edge is a mark, a token received by all York Rite Masons. Jackson is claimed as a native son by both the North Carolina and Tennessee, and it is still disputed if he was actually born in North or South Carolina. I have visited his home, the Heritage, which stands near Nashville, Tennessee and is now considered a national shrine. The sculpture is reminiscent of Thomas Sully's portrait of Jackson, which was also the pose for Jackson's portrait on the twenty-dollar bill. Brother Jackson is depicted here during his presidential years (1829 - 1837) with the Great Seal of the United States placed by his feet. Elected president at age 61, he walked bareheaded to the Capitol for his inauguration, standing tall, lean and ramrod straight. His formal dress may belie his reputation as the president who was truly of and for the common man, and indeed, he was the first president to be born in a log cabin. Known as a fighter both on the battlefield and in the White House. Jackson's slogan was "Let the people rule." This sculpture weights in at 4.25 lbs. and stands 14 inches tall and is 5.5 inches in diameter at its base. Each of the coins are affixed to the statue. The Royal Arch Chapter Penney is 1 3/16 inches in diameter and The Great Seal coin is 1.25 inches in diameter.

Reprinted from the Transactions of the Missouri Lodge of Research for the Educational Bureau of the Royal Arch Mason Magazine.

Andrew Jackson (1767-1845) Seventh President of the United States. b. March 15, 1767 in Washaw settlement between North and South Carolina. He was admitted to the bar in Salisbury, N.C. in 1787, and, the following year, migrated westward to Nashville, Tenn. Here he became a U.S. congressman (1796-97); U.S. senator (1797-98); judge of the Tenn. Supreme Court (1798-1804); and major general of Tennessee militia (1802). He defeated the Creek Indians at the Battle of Horseshoe Bend in 1814, and was made major general of U.S. Army and assigned to defend New Orleans in the War of 1812. His defense of that city made him a national hero. He added to his fame by operations against the Seminole Indians in 1818, and involved the federal government by pursuing Indians into Spanish territory, and hanging two English troublemakers. He was governor of the Florida Territory in 1821, and again U.S. senator in 1823-25. His first presidential race in 1824 was unsuccessful, but he was elected in 1828, and reelected in 1832. Under his administration the spoils system was introduced, the national debt paid off, the United States Bank overthrown, and the Peggy O'Neale scandal broke up his cabinet. There is doubt as to when and where he received his degrees. An article in The Builder in 1925 states: "The claim of Greeneville Lodge No. 3 of Tenn. (formerly No. 43 of N.C.) seems to be the most weighty. An original transcript shows that he (Jackson) was a member at that time." W. L. Boydon wrote in the New Age in Aug. 1920: "The generally accepted belief is that he was made a Mason in Philanthropic Lodge No. 12 at Clover Bottom, Davidson Co., Tenn." Bell, in his Famous Masons states: "Jackson was a member of Harmony Lodge No. 1 (formerly St. Tammany Lodge No. 29 of N.C.) Nashville, as early as 1800, but the date of receiving the degrees has not been learned. He was present at the first meeting of Tennessee Lodge No. 2, Knoxville, March 24, 1800. Charles Comstock, Past Grand Master of Tennessee and historian, believes that he was a member of Harmony Lodge, and records a visit by him to the initial meeting of Polk Lodge, U.D.1 Knoxville (dispensation granted Jan. 15, 1800) by "Andrew Jackson of Harmony Lodge of Nashville." In 1808 Harmony Lodge No. 1 lost its charter, and here all record of Jackson's Masonic affiliation ceases until 1822. He evidently kept in good standing by paying his dues to the Grand Lodge, as was then permitted. The proceedings of 1822 credit him with being a past master, but no record has been found of his mastership. He was elected Grand Master of the Grand Lodge of Tennessee, Oct. 7, 1822, and again in 1823, serving until Oct. 1824. He was elected an honorary member of Federal Lodge No. 1, Washington, D.C., Jan. 4, 1830, and of Jackson Lodge No. 1, Tallahassee, Fla. as well as the Grand Lodge of Florida (Jan. 15, 1833). He was a Royal Arch Mason, as he served the Grand Chapter of Tennessee as Deputy Grand High Priest at its institution, April 3, 1826, but no record exists of his affiliation with any chapter. As was the custom at the time, the Royal Arch degree was probably conferred by a blue lodge. He contributed $35.00 in 1818 to the erection of a Masonic temple in Nashville; requested two Lodges to perform funeral services; introduced Lafayette to the Grand Lodge of Tennessee in 1825; while president, assisted Washington's mother lodge to lay a cornerstone of a monument to Washington's mother in Fredericksburg, Va. (May 6, 1833); assisted in the Masonic laying of the cornerstone of Jackson City (across the river from Washington, D.C.) on Jan. 11, 1836; attended the Grand Lodge of Tennessee in 1839; and the same year visited Cumberland Chapter No. 1 of Nashville to assist in the installation of officers. d. June 8, 1845.

A special "Thanks" to Brother Jerry Stotler (jstot on eBay) for submitting the pictures and description of this wonderful statue.