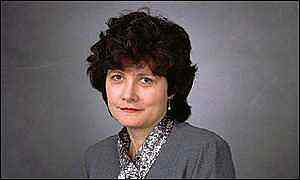 Melanie Johnson complained current rules for Freemasons were "too vague"

The government's public appointments watchdog is to review whether Freemasons joining health service trust boards and other public bodies should have to declare their membership.

Committee members told Sir Leonard that Masons should be forced to declare their membership of the secret society.

Appearing before the committee to give evidence, Sir Leonard said he would expect anyone applying to join a non-departmental public body to declare any possible conflict of interest and explain whether it was in fact a handicap.

Members of the secretive organisation could face new scrutiny

That would include Freemasons, he said.

But Labour MP Melanie Johnson complained those rules were "far too vague".

"There's an area of real public concern. It appears to be left very open in an area in which much more prescription would be helpful to everybody," she said.

Sir Leonard said it would be wrong to ban all Freemasons from applying for public jobs without giving them a chance to explain why their membership was not a handicap.

He said that in his previous job as chair of the Police Complaints Authority, none of his members were Masons but he would have been happy to have had one or two.

He would have balked at having too many Masonic members because that would limited the number of people who could supervise the many complaints alleging Masonic involvement in police wrongdoing, he added.

And he said the chair of the Criminal Cases Review Authority, Sir Frederick Crawford, was known to be a Mason, and "his membership doesn't seem to have handicapped him in doing the job."

Ms Johnson told him: "People are very concerned about the impartiality of people doing these jobs. They should actually have to declare that so the public can see.

"It has to be transparent and accountable."

Sir Leonard then promised: "I will look at it."

The Home Office and Lord Chancellor's Department have already decided to order newly-recruited judges, magistrates and police officers to declare whether they are Masons.

Existing members of those professions are to be asked to voluntarily declare their membership.

During his evidence to the committee Sir Leonard also warned Tony Blair to start winding up the many taskforces the government has set up since the election - or apply strict anti-sleaze rules to them.

Sir Leonard said any taskforce should last no more than a year or two before being brought under tough anti-sleaze rules applied to other government appointments.

As well as ministers and civil servants, they often include experts in the field and business figures with an interest in the particular subject being examined - which has led to charges of conflicts of interest.

Labour MP Lynda Clark said there were "fundamental objections to government having the power to set up bodies which are totally outside the system of checks and balances.

Sir Leonard told the committee he did not want to impose the full appointments procedure - outlined by the sleaze-busting Committee on Standards in Public Life - on what were supposed to be fast and flexible means of tackling specific problems.

Ensuring candidates are appointed fairly and on merit would delay the establishment of any taskforce by at least six months, he said.

But if they lasted longer than a year or two, the usual rules should start to apply and some places on them should be competitively advertised.