Betty's Lodge: MI5 and the rise of the Muslim Brotherhood 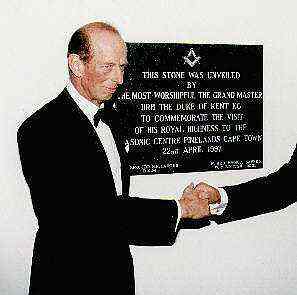 The British governments recent announcement that it plans to expand its internal intelligence and security service, MI5, by 50 percent over the next several years has not met with much opposition in the UK. This is all the more surprising given the fact that this expansion is the biggest since World War II.

The lack of opposition and intense public scrutiny has inevitably lent credence to the official contention that the expansion of MI5 is designed to meet the growing threat of Islamic terrorism.

This plan might lead to a shift in the way British security handles its relations with Islamic organizations in the UK. This could not only affect the patterns of Islamic activism in the UK, but moreover lead to the overhaul of the unique security/intelligence culture of the United Kingdom.

According to Albert Speer, Hitlers notorious architect: Espionage is so dirty that only gentlemen can do it  That is why the British are so good at it. The British certainly like to think they possess the most effective security/intelligence agencies in the world.

The British intelligence community is essentially comprised of three components; MI5 and MI6, dealing with internal and external intelligence respectively and GCHQ, the signals intelligence agency.

MI5 has a 95-year history. It was christened in October 1909 by then-Prime Minister Asquith as part of the broader effort to counter German espionage in the UK. The service was initially called the Secret Service Bureau, but in 1916 it came under the jurisdiction of the Directorate of Military Intelligence and assumed the title Military Intelligence Five (MI5). In 1931, formal powers for assessing and countering all threats directed at the security of the UK were invested on MI5, thereby giving it the new name of the Security Service, but MI5 continues to be used as the most popular title.

Allegations that British intelligence enjoys a special relationship with Islamists are not new and date to the beginning of the 20th century, when many Iranian secular and nationalist constitutionalists dismissed Seyed Jamaledin Asadabadi, arguably the founder of modern political Islam, as a freemason and British agent.

These allegations resurfaced more than 70 years later, albeit this time directed at Iranian Ayatollah Ruhollah Khomeini, who was branded an English agent by remnants of the deposed monarchical regime. Indeed this conspiratorial discourse continues to inform the worldview of the fast-dwindling remnants of the universally despised Pahlavi monarchy.

In fact, if British intelligence Ù and specifically MI5 Ù have enjoyed a special relationship with any quarter, it has been with the Israeli intelligence community. Throughout the 1980s the Mossad had tremendous freedom of action in the UK. In July 1984 Mossad agents kidnapped a former Nigerian minister, Umaru Dikko, in London in a vain attempt to transport him to Nigeria. This operation was an attempt by Israeli intelligence to curry favor with the new Nigerian regime of General Mohammed Buhari.

Moreover, MI5 provided Mossad with plenty of leeway to run Ismael Sowan, their star agent inside the PLO station in the UK for a number of years in the 1980s. Sowans house was later raided by British anti-terrorist police who discovered a cache of weapons. Mossad had known about the weapons cache and had not informed MI5. This was a humiliating experience for the Security Service.

But even this freedom of action can not be termed a special relationship from a British perspective. British intelligence would argue that these are merely sophisticated tactics and modes of operations that have been evolving for centuries. There is an element of truth to this.

It is from this perspective that Britain has historically dealt differently with Islamic activism than other European countries, in particular France. This has led to French charges that the UK tolerates Islamic terrorists Ù a specific reference to the ability of Algerian Islamic extremists to operate inside the UK with seeming impunity for a number of years.

Moreover independent researchers have come up with the name Londonistan when referring to Britains capital, which is now well and truly established as the most cosmopolitan metropolis in the world. The name Londonistan is instructive in so far as it highlights the concentration of Islamic activism in London.

While elements within French intelligence accuse British security of tolerating Islamic terrorist activity, independent researchers allude to incompetence and a laissez-faire attitude to asylum and immigration as the key factors in the emergence of Londonistan.

Both contentions are wrong. The emergence of Londonistan is rooted in a carefully crafted British policy that fuses a distinct security culture with Britains historical hospitality to foreign activists.

First and foremost, the majority of Islamic activism in the UK is legitimate and peaceful. London is now the centre of various Islamic oriented organizations that challenge the tyrannies in their home countries. These range from the old guard of Egypts Muslim Brotherhood to the ultra-modern Movement of Islamic Reform in Arabia led by Saad al-Faqih.

The British fully recognize the legitimacy of these activities and provide these organizations with ample scope to pursue their struggle. This corresponds to the centuries-old tradition of British hospitality extended to foreign activists. On the other hand, the presence of these groups enables British intelligence to spy on their activities and effectively gain some form of leverage over the internal politics of their home countries. vThis policy has its limitations. The most dramatic example is when the British government, under pressure from the Saudi regime, tried to expel the Saudi Arabian dissident Mohammed al-Masari from the UK in 1996. This plan was scuppered by the UK judiciary which was keen to safeguard the inherent fairness of Britains judicial system.

Clearly illegitimate activities, namely terrorism, are a wholly different proposition. What the French term toleration of terrorism is only accurate to the extent that it highlights the excessive vigor of French counterterrorism. The British counterterrorist culture is more subtle and in the long term arguably more effective.

The expansion of MI5 from 2,000 to 3,000 personnel would be most welcome by the majority of Britons, particularly ethnic minorities like me, if it were designed to meet a genuine threat from Islamic terrorism. However, if it is designed to intimidate Ù and possibly even suppress Ù legitimate religious/political activities, then it is likely to have pernicious consequences.

Ironically, it will align Britain closely with the security and political culture of the continent, and this is a prospect that the majority of Britons, indigenous and ethnic minority alike, instinctively oppose.


Mahan Abedin, a London-based financial consultant and analyst of Iranian politics, wrote this commentary for The Daily Star