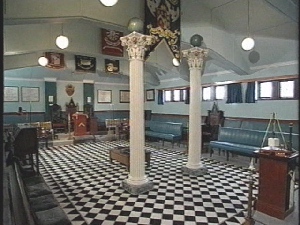 Irish Member of Parliament: 'Every Time I Raise the Issue of Bilderberg I Get Sent From Pillar to Post'

Hunkering down in an unwelcome blizzard of publicity, Bilderberg developed a new strategy for achieving its goal of a world government. Behind lines of mostly invisible security at the Canadian Imperial Bank of Commerce Leadership Center, Bilderberg set forth its plans during its annual gathering from May 30 to June 1 in 1996.

For openers, the Global Plantation wanted to employ new propaganda techniques to counter surging patriotism in the West.

New "scientific studies" warned of impending world disasters: Refugees fleeing farms for lack of "sustainable growth" would lead to famine in cities. Also, hysteria over water and air pollution was to be generated.

"People of the world, but especially stubborn Americans, who want to cling to every last shred of sovereignty, must be made to understand that we all breath the polluted air and drink the foul water; the air and waterways know no borders and have no loyalties.

"To say that a supranational agency under the UN must address this problem is stating the obvious," he added. "It is equally obvious that the UN must have final arbitration over immigration issues as the refugees grow in number."

"Since we last met [in Burgenstock, Switzerland] we have seen the problem of nationalism increase, not abate, in Europe but more so in the United States. If reforms are to succeed, we must convince the middle class that supporting new powers for the UN is a patriotic duty, to save his country from natural disasters." 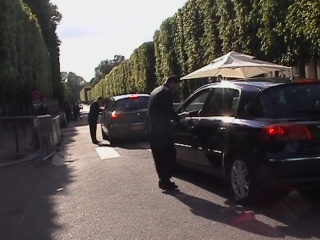 The prescece of two leading "conservative" voices within the ranks of the plutocracy, the aforementioned Buckley and Podhoretz, indicates that Bilderberg intends to continue flexing its influence over the "loyal opposition" in the ranks of the so-called "Republican right" and the "conservative movement." Buckley and Podhoretz are charged with suppressing populist and nationalist grass-roots rebellion with the GOP as represented by Buchanan's maverick presidential candidacy. At last year's Bilderberg confab in Burgenstock, Switzerland, the official "guest conservative" was Buchanan's leading critic, William Kristol, publisher of Murdoch's Weekly Standard.

The gathering of the international elite heard more:

"Make [the masses] understand that, if we fail to have a strong global government, empowered to act effectively, quickly and decisively, the disaster that will eventually strike the Earth will impact them, too, and waving a flag will be meaningless. What is the value of the nation-state if it cannot meet these challenges?"

In that year, the general feeling imparted by Bilderberg was: Brace for propaganda designed to make you feel unpatriotic unless you support massive transfers of American tax dollars overseas.

"We must promote a 'Lincolnesque' view ...the world cannot long endure half-poor and half-rich ...hunger in Africa and poverty in Russia are as important a problem for America and other industrialized nations as highways and bridges."

Unless wealthy nationas acted, the propaganda line went, they would be overwhelmed with floods of refugees that could not be stopped.

"Is it not better to surrender a significant amount of sovereignty so world problems can be addressed on a global level than be so overwhelmed later that our precious borders are meaningless?" one asked.

"We cannot let America or any other country arbitrarily close its borders so the refugee or the refugee burden falls more heavily on others," one said. "Still, estabilishing a supranational UN agency to arbitrate these matters will be as difficult to sell as it is necessary to be done."

Despite their dejection over the increase in "provincialism" and "nationalism," Bilderberg had something to celebrate. "We have now established NATO as an instrument of the UN, and there has been little adverse reaction other than the far-right wing," one said. He predicted that NATO would change its charter to allow ventures outside Europe - anywhere in the world.

"The European experiment has succeeded," he announced. He was referring to the fact that NATO intervened in former Yugoslavia under direction of the UN Security Council. Americans served under a foreign commander; the president and Congress had no voice in the matter, despite the Constitution.

The U.S. defense secretary that year, William Perry, who once assured this writer that he opposed a UN standing army, is not known to have objected to these comments, although he was present.

"Even American 'conservatives' welcome NAFTA and call for expansion, so the only problem we must deal with is super patriots and nationalists of the right-wing," one Bilderberg was overheard saying.

The plutocrats agreed that the program to establish Europe as a superstate with a common currency is on track and the Asian Pacific Economic Community is evolving, at a satisfying pace, into the Pacific Union.

"Our biggest problem is America," one said, in an unintended tribute to the United States. "Where once we could make significant progress undisturbed, every year we are having more problems with American nationalism, making some things politically difticult."

One of the final goals of the Global Plantation has been to expand the European Union to include Poland and eventually other former Warsaw Pact countries and, then the former Soviet states, making the entity continent-wide. similarly, one-world leaders wanted to press the expansion of NAFTA to include all nations in the hemispheric unit to ultimately have a governing "parliament" for an "American Union." thus dividing the world into three great regions as George Orwell predicted in his book 1984.

A few days after the 1996 Bilderberg meeting ended in Canada, one-worlders quickly put together plans to strengthen the Global Plantation. What a coincidence.

Ultimately, these two moves were to merge into a situation where the UN would have final authority - enforced by a world army - which would allow it to enter the United States or any nation, and whereby it could arbitrarily ship taxpayer funds from the Western nations to poor countries.

These mutual missions have the weight of the White House behind them. Clinton had sent his senior advisor George Stephanopoulos to the secret meeting in Canada to receive his orders.

Even as the UN-sponsored Habitat II conference in Istanbul, Turkey, was deciding that housing is a "right" for all people. UN functionaries were calling for a "food summit" in Rome in Novemeber 1995 to proclaim a full stomach a world "right."

Once it was decided that adquate housing and food are the rights of every world citizen, it would become the proclaimed "duty" of the United States and other industrialized nations to implement these "rights".

While these dual campaigns would advance the visionaries' dream of a world government, there were immediate and immense profits in store for the Rockefellers, Rothchilds and other international financiers involved in these secret sessions.

While American taxpayers and those of other Western nations provide housing and food, these international entrepreneurs would be hailed as statesmen for "helping" the poor countries as they build factories and other enterprises.

As your tax dollars provide food and shelter, the rich get richer by paying slave wages in poor countries that are unencumbered by such "fringes" as pensions, paid vacations and health insurance provided by may domestic companies.

The Food and Agricultural Organization, a UN agency, would work toward achieving a "food for all" goal in November, it said in a statement.

"Support from the United States has been extremely important" for both food and housing "rights," said Hilmi Toros, who was participating in the Istanbul summit. "They have given us their full support."

Agreement on the housing "right" in Istanbul was applauded by the United States. "For the first time [the agreement] translates [housing rights] to the common level," said Michael Stegman, assistant secretary of Housing and Urban Development and alternate head of the U.S. delegation.

Participants weren't timid about demanding the resources of the United States and other Western nations. Wealthy nations should not only make housing a "right," but should pay the costs, said Fernando Berrocal Soto, a Costa Rican delegate and representative of the "Group of 77" poor countries.

"Substantial financial resources should be mobilized by the international community with a view to address the issue of human settlements," he added.

Meanwhile, NATO was being revised to enhance its emerging role as the UN's world army. Meeting in Berlin, NATO bureaucrats agreed to be "more flexible" and to continue working "outside the alliance," as it is now in Bosnia, where troops will remain beyond the one-year commitment.

NATO also agreed to bring in Poland first, then Hungary and the Czech Republic. Ultimately, all European countries, including Russia, would be part of this continental army.