The Book of Fate by Brad Meltzer

The Book of Fate by Brad Meltzer 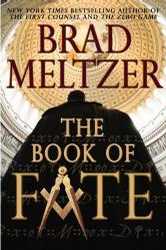 Brad Meltzer knows how to grab your attention. With the first words of his new book, he begins to spin a tale of political corruption rich in Masonic history: “Six minutes from now, one of us would be dead. That was our fate. None of us knew it was coming.”

At least that’s what they thought.

Meltzer quickly sets up the botched assassination of President Leland Manning. Seen through the eyes of Manning’s ambitious aide, Wes Holloway, the action unfolds. While Manning manages to avoid harm, his oldest friend and deputy chief of staff, Ron Boyle, finds himself in the gunman’s line of fire and is killed; Wes is facially disfigured.

Manning loses the election after the shooting, but Wes continues to work for him over the next eight years. Plagued by a lack of confidence because of his appearance and by guilt because of Boyle’s death, Wes can’t seem to move on.

When Boyle mysteriously shows up alive and surgically altered, it’s clear to Wes there’s more to the assassination attempt then he’d thought. As one of the only people who know Boyle is alive, Wes is thrown into a complex scandal as he tries to understand what really happened eight years earlier.

Three power players help him in his search for the truth—former presidential aide Gavin “Dreidel” Jeffer; Wes’s best friend and lawyer, Rogo; and Palm Beach gossip columnist Lisbeth Dodson. This crew finds itself in search of an elusive group known as The Three, who, they discover, may be responsible for the assassination attempt. On their trail with the help of a 200-year-old Masonic code, Wes and his team unearth clue after clue. Meltzer also offers the unsettling viewpoint of Nicolas Hadrian, a impressionable radical and son of a Freemason; Hadrian was tricked into the assassination attempt by The Three and recently escaped from jail to find Wes because he believes it’s written in the so-called Book of Fate that he should kill him.

The plot moves quickly, but at times there’s a lot of information to grasp as the narration moves abruptly back and forth among characters. The surprise twist is just that; however, once it’s revealed toward the end, the remaining story is somewhat anticlimactic.

While some may say Meltzer is jumping on the Da Vinci Code bandwagon with his focus on the mysterious society of Freemasons, The Book of Fate deals with the topic differently than Dan Brown did, by focusing more on Washington politics and its connection to secret Masonic history. Meltzer’s tale interestingly combines historical fact with fiction, opening a door into political corruption that the public is rarely allowed to see in action.