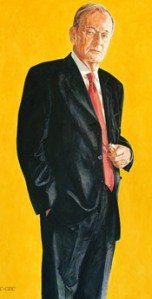 Former prime minister Jean Chrťtien, known to throw a punch or two during his time in office, has come out swinging in defence of embattled politicians at the hanging of his official portrait on Parliament Hill.

In a speech highlighting his memories of 40-plus years in Ottawa on Tuesday, Chrťtien spoke of his pride in being a career politician and praised those who chose to run for public office, including his adversaries.

"We have to show respect for the men and women who devote themselves to public life," he said to a crowd that included Prime Minister Bro. Stephen Harper, Liberal Leader Bro. Michael Ignatieff, NDP Leader Bro. Jack Layton and Bloc Quťbťcois Leader Bro. Gilles Duceppe.

"It is a very noble life," he added. "Thank you for what you are doing."