The Grand Lodge of Free and Accepted Masons of Pennsylvania
http://www.pagrandlodge.org/mlam/apron/ 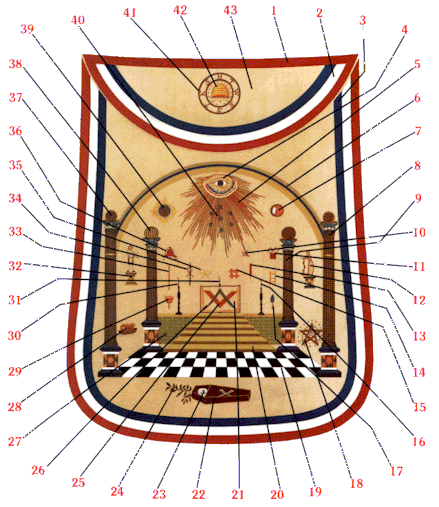 Bro. George Washington's Apron
(one of two that he owned)

Number above Explanation below

When the young Marquis de Lafayette came to America at the age of 20 and joined George Washington's army for the Battle of Brandywine in 1777, the American cause had become his cause.

The affection each man held for the other is legendary. So, too, is the legacy of Masonic history developed through that affection. For many years Masons and non-Masons believed that the white silk apron known as the Lafayette Apron, had been embroidered by Madame Lafayette and presented to Bro. George Washington by Bro. Lafayette in August of 1784. This cannot be documented as fact. It has, however, been ascertained that the Apron did indeed belong to Bro. Washington, and current research suggests that it was made in China.

The apron was presented to the Grand Lodge of Pennsylvania by the Washington Benevolent Society on July 3, 1829 and is now on display in the Grand Lodge Museum at the Masonic Temple in Philadelphia. It is a study in symbolism. For example, the apron border colors of red, white and blue are the national colors of both the United States and France. Symbols are silent emblems having meaning only when interpreted. Given the unique character of the interpretation process, it can be understood that no symbol has absolute meaning.

In preparing the following, the late Bro. Frank W. Bobb, Grand Lodge librarian and curator, has used those meanings most widely accepted by Masonic scholars in interpreting the symbolism of the Washington Apron.

1. RED symbolizes courage, zeal, the blood of life, and fire. It is the color of Royal Arch Masonry.

2. WHITE has throughout the ages represented purity and innocence.

3. BLUE has been esteemed since antiquity as a beneficent color, denoting immortality, eternity, chastity and fidelity. It is the color of Symbolic Masonry, "the Blue Lodge."

4. ALL-SEEING EYE,a symbol of watchfulness and of the Supreme Being.

5. RAYS or Glory, symbolic of the power of the Supreme Being to penetrate the innermost reaches of the human heart.

6. RAINBOW is sometimes associated with the Royal Arch. It is also part of the architectural arch, being the 9th arch under Solomon's Temple. It is supported by two Pillars (see No.8). Another interpretation calls it the Arch of Heaven supported by pillars (Job 26:11). The pillars which support the arch are emblematical of Wisdom and Strength.

7. MOON, one of the Lesser Lights in Freemasonry. The Moon governs and rules the night.

8. PILLARS OF ENOCH. Enoch, fearing that the principles of the arts and sciences might be lost, erected two pillars. the one of marble to withstand fire, the other of brass to resist water. On each he engraved that which he feared would be lost. The Globes are symbols of Unity and Peace and Plenty. (See also No.37)

9. PILLARS B. and J. were within the porch of King Solomon's Temple. Boaz the name of the left pillar means "in strength"; the right pillar, Jachin, means "God will establish" (see also No.38). The globe on the left pillar represents earth; that on the right, heaven. These brazen pillars with their globes are today the columns of the Senior and Junior Wardens.

10. DOVE in early Masonry is a symbol of Noah's messenger. In ancient symbolism, the dove represented purity and innocence.

11. FORTY-SEVENTH PROBLEM OF EUCLID'S first book of geometry. It is said that when Pythagoras solved the problem he exclaimed, "Eureka!," which signifies "I have found it." It is, however, not a problem, but a theorem. It has been adopted as the symbol on the Past Master Mason's Jewel in Pennsylvania (The Ahiman Rezon, Art. XVI, Sec, 3 & 4).

12. HOPE is sometimes shown as a female with an anchor, also as an anchor near the ark. ANCHOR, an emblem of a well-grounded hope and a well-spent life. With hope, an Anchor holds the soul both sure and steadfast.

13. PLUMB, the proper Masonic Jewel of the Junior Warden, admonishes us to walk uprightly before God and man. It is one of the working tools of operative Masons, used to try perpendiculars.

14. JACOB'S LADDER without a clouded canopy or star-decked heaven, which he saw in a vision ascending from earth to heaven. The three principal rounds are denominated FAITH, HOPE, and CHARITY.

15. SQUARE WITHIN BOUNDS is a symbol formed by four stonemason's squares of equal arms superimposed one on the other to form a central square. This symbol has not been found in American or English books of Masonic symbolism and therefore may well be of French origin. There has been no interpretation found for it to date.

16. LIGHTS or BURNING TAPERS, like the three principal Lodge officers, refer undoubtedly to the three stations of the sun: its rising in the East (Worshipful Master), its meridian in the South (Junior Warden), and its setting in the West (Senior Warden). (See also Nos. 30 & 31)

17. TROWEL, a working tool of the operative mason, is used symbolically for spreading the cement of Brotherly love and affection.

18. FIVE-POINTED STAR represents the five points of fellowship. Within the star is the letter "G," a well-known symbol of Freemasonry representing both God and geometry.

20. STEPS are usually three in number. The six steps are said to represent degrees Washington received.

22. COFFIN has always symbolized death. It is found on tracing boards of the 18th century and, in that time, constituted a part of the esoteric symbolism.

23. SKULL AND CROSS-BONES are symbols of mortality and death and are so used in French degrees.

24. SPRIG OF ACACIA. The acacia tree is supposedly the shittah wood of the Old Testament. The name is sometimes spelled Cassia. It has long been used as a symbol of immortality.

25. SQUARE is the proper Masonic Jewel of the Master of the Lodge. It is one of the Great Lights in Freemasonry. It is the stonemason's square of two equal arms.

26. COMPASSES, the proper Masonic emblem of the Craft, and one of the Great Lights in Freemasonry.

27. BRICK WALL appears to represent the place in the Lodge occupied by the Altar. The Holy Bible, Square, and Compasses rest upon it, as do the three Lesser Lights. It composes nine rows of bricks, one upon the other. To give the symbolic meaning of the wall would be mere speculation.

28. ARK is emblematical of that Divine Ark which safely carries us over this tempest-tossed life. It is often shown with the Anchor.

29. SETTING MAUL, in operative Masonry, is used for setting stones, that is, tapping them to a firm seat in the mortar or urging them sidewise into place. It is considered by some to be a symbol of untimely death.

32. TREASURER of the Lodge wearing the Apron of his office and holding the emblem of his office, Crossed Keys.

34. SWORD POINTING TO A NAKED HEART demonstrates that justice will sooner or later overtake us; and that although our thoughts, words and actions may be hidden from the eyes of man, they are not hidden from the All-Seeing Eye.

35. TASSEL consists of a cord with tassels on the ends. It alludes to the Care of Providence which surrounds and keeps us within its protection while we govern our lives by the four cardinal virtues: temperance, fortitude, prudence and justice. The tassel may also represent the Mystic Tie, that sacred bond which unites men of diverse opinions into one band of Brothers.

36. LEVEL, the proper Masonic Jewel of the Senior Warden, symbolizes equality and reminds us that we are traveling upon the level of time, It is one of the working tools of an operative mason.

39. SUN, one of the Lesser light as a source of light it reminds the Mason of that intellectual light of which he is in constant search.

42. BEEHIVE is the emblem of industry. It teaches us that as we came into this world rational and intelligent beings, so we should ever be industrious ones.

43. APRON. The Masonic Apron, which derives from the working apron of the stonemason, is in itself a symbol. It is an emblem of innocence, and the badge of a Freemason.