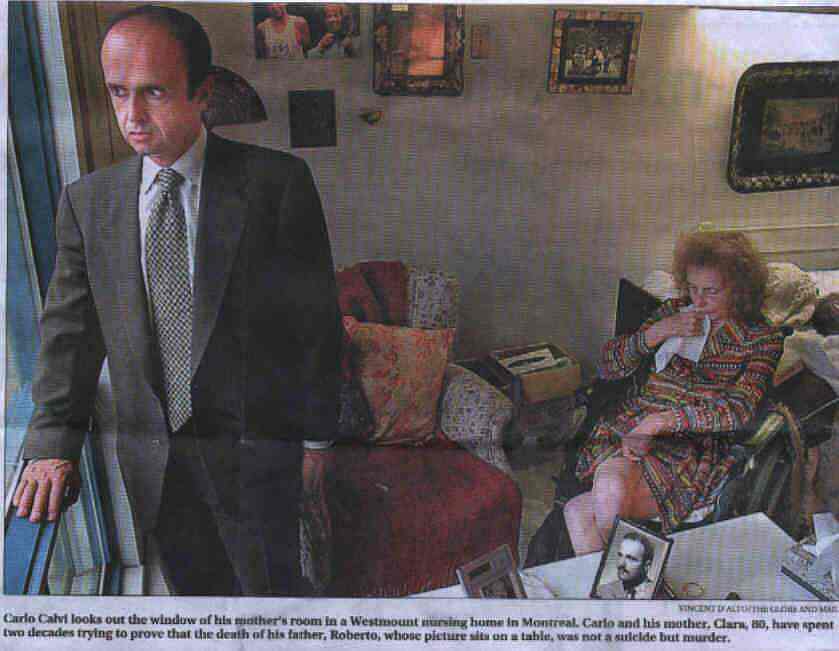 The Globe and Mail
Page A3

The death of Roberto Calvi has been called one of the greatest criminal mysteries of recent times - a strange whodunit with a web stretching from the Vatican to the Mafia to a skeptical family in Montreal.

Twenty years ago, Mr. Calvi was found dangling from a noose beneath Blackfriars Bridge in London, his pockets and waistband stuffed with bricks. Ever since, questions have persisted about how the top Italian financier known as "God's banker" really died.

At first, a London coroner concluded it was suicide.

Mr. Calvi's son and widow, who live in Montreal, have doggedly tried to prove suspicions that Roberto Calvi was killed.

Now they say the suspicions were well founded.

New forensic tests carried out on Mr. Calvi's exhumed body by an international panel for the Rome prosecutor's office have concluded the banker was the victim of murder, not suicide.

The findings - which have not been officially released, but have been widely reported in Italy - have brought a sense of vindication in Montreal. The panel based its conclusion on evidence from Mr. Calvi's body that suggests he was already dead when taken to Blackfriars Bridge.

"This brings irrefutable evidence," said Carlo Calvi, Roberto's 49-year-old son. "It's a lot more conclusive than what we have had hoped."

Carlo Calvi's home in lofty reaches of Montreal's Outremont district is like a clearinghouse of information on his father's death. Around 60 boxes about the case lie in the basement. Files and books jam the bookshelves of his study.

And gazing out from a photo is a reminder of Carlo Cali's "sense of purpose": a man with dark looks and a probing stare, Roberto Calvi.

"He didn't look to me like he was a bad person," Carlo Calvi, himself a banker, says about a man linked to some of the darkest forces in Italy. "He was just out of his depth once he found himself at the top."

Carlo Calvi isn't alone in his obsession. Shrouded in intrigue for two decades, the case has been tacked in books, a feature film and enough articles and judicial probes to fill several vaults.

The Roberto Calvi story reads like a far-fetched plot for a Hollywood thriller. He stood at the heart of one of the biggest scandals in modern banking history, one that implicated the Mafia, the Vatican and a secret Masonic lodge known as P2.

As chairman of Banco Ambrosiano, he was an influential financier who was nicknamed God's banker because of his close ties to the Vatican. In June, 1982, a year after being convicted of massive currency violations in Italy and with his bank teetering on collapse, he vanished. A week later, he was found hanging from scaffolding beneath Blackfriars Bridge, over the Thames.

Banco Ambrosiano collapsed with enormous debts in a $1.3-billion (U.S.) bankruptcy. In the shock that followed evidence emerged of murky connections among politicians, mobsters, prelates and Masons.

From the start, the theory that Roberto Calvi killed himself never washed with Carlo Calvi or his mother, Clara, who continues to defend her husband from her Westmount nursing home. She is 80 and uses a wheelchair.

Suicide seemed too improbable because Roberto Calvi would have had to clamber down a ladder and edge along scaffolding with the agility of an Olympic gymnast - unusual for a 62-year-old, overweight man.

Early coroner's findings found no traces of dirt or rust on his hands, a fact confirmed in the new inquiry, which found no residue from the scaffolding or the bricks.

"You can't go through all that without getting dirt on your hands," his son said.

His neck also showed no signs of hanging, leading experts to conclude he was strangled nearby and taken to the bridge by boat, according to reports.

Who would want Roberto Calvi dead? The banker had made many enemies, both in the Vatican and the Mafia. Italian magistrates say he was overseeing money laundering for the Mafia and was killed in retaliation for mismanaging the plot and skimming off cash.

Carlo Calvi believes his father died because he would have testified at his currency trial about the activities of offshore companies controlled by the Vatican.

Near the end of his life, Roberto Calvi confided he was growing nervous about the people around him. "He said his life was threatened but we didn't believe it until after his death," his son said.

Less publicized in the saga is the fact that Roberto Calvi had started to apply for landed-immigrant status in Canada a few months before his death. He had links with Alberta businessmen and hoped to retire in the province.