By Bruce Johnston in Rome

Four suspects in the mysterious death of Roberto Calvi, known as "God's banker" because of his Vatican ties, have been charged with his murder and will go on trial in October, Italian media reported yesterday. 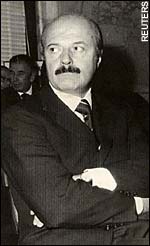 
Calvi, a member of the P2 secret masonic lodge and the head of the Banco Ambrosiano, a bank in which the Vatican had a key stake, was found hanged from scaffolding beneath Blackfriars Bridge during a visit to London in 1982.

His death came days after the collapse of the Banco Ambrosiano following the disappearance of more than a billion dollars.

Italian reports said Flavio Carboni, the Sardinian businessman who accompanied Calvi to London, and Carboni's former girlfriend, Manuela Kleinzig, an Austrian, had been charged in connection with his murder.

Renato Borzone, a lawyer representing Carboni - one of the last people to see Calvi alive - rejected the charges. "The defence maintains that - based on examinations - Calvi committed suicide."

Yesterday's development comes two years after a new autopsy established that Calvi did not kill himself, as a London coroner had ruled. The report was ordered by Rome magistrates acting on the claims of a supergrass that the Mafia killed Calvi for unsuccessfully investing its money.