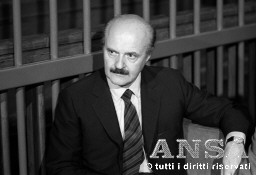 (ANSA) - Rome, October 6 - Some 175 people were called to testify Thursday at the start of a trial for the murder of 'God's Banker' Roberto Calvi, found hanging from a bridge in London more than 20 years ago .

The prosecution did not release its witness list but some experts think one may be the 81-year-old former head of the Vatican Bank, Cardinal Paul Marcinkus, who retired to Arizona shortly after the death of Calvi, the former head of Italy's biggest private bank .

Only Carboni was present in court, saying he had no reason to want Calvi dead as he needed to recover huge sums from the banker .

Calvi was found hanging under Blackfriars' Bridge on June 18, 1982, his pockets bulging with banknotes and bricks. Carboni and Kleinszig's lawyers claimed the trial was based on "bogus" information fed to prosecutors by Mafia turncoats eager to boost their standing with police .

Legal experts said the trial - which was adjourned on Thursday - could last as long as two years .

MOTIVES FOR THE MURDER

Calvi's death was originally ruled a suicide but he is now thought to have been killed for not paying back laundered money to the Mafia .

The defendants are accused of luring Calvi to London where he would feel safe, ahead of a Mafia execution rigged to look like a suicide .

Prosecutors claim there are other motives for the killing .

These include a desire on the part of those who commissioned the murder to gain leverage among Calvi's extensive network of contacts with masonic lodges, Vatican bank Istituto per le Opere di Religione (IOR), political and institutional figures, and public-sector agencies .

Licio Gelli, 86, the convicted head of the subversive Propaganda Due (P2) lodge, is one of a dozen suspects in a related probe to establish who ordered the hit .

In a fresh twist on the eve of the trial, previously unseen letters emerged from Calvi to various members of the Vatican hierarchy, ending in a last desperate plea to Pope John Paul II .

The letters, provided by Calvi's family, were published in a book called Poteri Forti (shorthand for allegedly shady string-pullers in the Italian business and political establishment) .

It is the fruit of long investigative work by a former CNN and International Herald Tribune journalist, Ferruccio Pinotti. British police reopened inquiries into Calvi's death after the Italian indictments were sought two years ago .

Acting on the request of the Italian prosecutors, British forensic experts determined that Calvi could not have climbed out onto a scaffold under the bridge and so a 1982 British coroner's suicide verdict was "unsafe", legal jargon for "wrong." The British police now believe that Calvi was killed by the Mafia at a building site and his body later hung under Blackfriars Bridge .

Back in Italy, prosecutors tracked some 1.3 billion dollars through the offshore units of Calvi's Banco Ambrosiano shortly before the bank went bust and Calvi went missing .

The money and its movements, judicial sources said, were "directly linked" to Calvi's death .

A bank deposit box in Calvi's name, found in the course of the investigation, also had a "significant" link to the murder, they said .

Prosecutors reconstructed "complex company operations" and huge movements of money through Banco Ambrosiano subsidiaries in Panama, the Bahamas, Peru, Nicaragua and other countries .

The investigation into the death of Calvi, who earned the nickname 'God's Banker' by working closely with IOR, was re-opened seven years ago. Calvi's body was exhumed and a new autopsy performed but no conclusive evidence was found .

Calvi was a leading light in Italian banking circles for many years. In 1975 he became chairman and managing director of the Banco Ambrosiano, building it up at what police say was a suspiciously quick rate .

According to theories aired over the years by informants, Calvi worked hand-in-hand with Mafia-linked banker Michele Sindona - killed in jail by a poisoned cup of coffee in 1986 - to set up a complicated web of banking and insurance interests .

Many paths were allegedly smoothed by his membership of Gelli's lodge, along with top names from business, the media and politics .

Future media mogul Silvio Berlusconi, currently Italian premier for the second time, took out membership shortly before Gelli's fall. He has claimed he thought the lodge was a sort of gentleman's club. Former P2 "grand master" Gelli is under house arrest, serving a long sentence for the Ambrosiano collapse .

Some theories have it that Calvi was forced into a corner by his exposure to the Vatican Bank .

By the summer of his death, Calvi's network owed something like 200 million dollars to the shell companies in Latin America, many of them controlled by IOR .

It has been suggested that in the run-up to his death, Calvi was desperately casting around for money from P2 members to pay back Marcinkus .

But with his name appearing on the P2 membership lists as investigators burrowed deeper into the lodge mysteries, he disappeared from his home on June 10, 1982 and was not seen again by anyone who has come forward to magistrates .