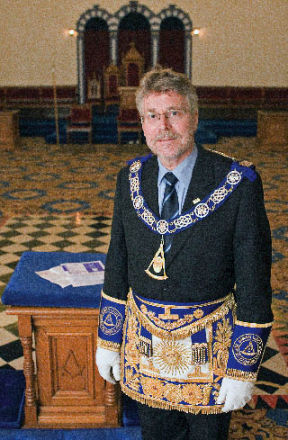 Retired teacher Stephen Godfrey is just starting his one-year term as Grand Master of the Grand Lodge of British Columbia and Yukon, a Masonic organization with more than 10,000 members.
Aug 08 2007

Masons and Odd Fellows might seem mysterious, but both organizations played an important part in the development of Greater Victoria

They are iconic secret societies with close historical links to wealth and power. Victoria Masons and Odd Fellows have been part of the fabric of the city by doing charity work, leading commerce and providing political leadership since the Gold Rush era. Recently, however, they’ve faced significant membership challenges that raise questions about their future.

Their exclusivity, secret methods of recognition, cryptic ceremonies and perceived influence have long stimulated people’s fears of clandestine plots. They are thought to be the hidden hands behind the selection of important leaders, the operation of high finance and monumental diplomatic manoeuvres.

No group has been identified with this elitism and mystery more than the Masons. Their origins are shrouded in secrecy. A preponderance of Masonic literature traces the group’s beginnings to Scottish stonemason guilds in the 14th century, but many other authors have pointed to a lineage that runs back to the Knights Templar – and even as far back as ancient Egypt.

The beginnings of Masonry in Victoria can be traced to the Gold Rush, with the first recorded meeting taking place in 1858. The society’s members have been pillars of the Island community as lieutenant-governors, premiers and entrepreneurs. They’ve done important charity work, their names grace local schools and alleys, and their keystones are found in many of Victoria’s most precious heritage buildings. Despite this illustrious past, the society faces serious modern challenges, says Stephen Godfrey, the Grand Master of Masonic orders in B.C.

A significant sign of the times is the absence of DeMolays in Victoria– a Masonic order for youth aged 11-20 that once thrived and functioned as a precursor to membership in the official lodge. Public perceptions have undoubtedly played a part in the Mason’s membership challenges. Stereotypes about the importance of bloodlines or candidates needing to be politically powerful and wealthy are legion.

Godfrey bristles when asked about these stereotypes and says that the group does not recruit from any particular demographic.

“People out there believe more about Masons than is actually happening. We aren’t as closed as we appear.

“The only secrets are our words of recognition and our modes of recognition. Masonry is open to anyone of any religion and any race. We welcome all men. People join because they want to learn about values, virtue and philosophy.”

According to Godfrey, the minimum requirements for a nominee to join the group include believing in a supreme being and being of good moral character. Officially, a person must have at least six months’ local residency and be nominated by at least two existing Mason members. Women’s membership is limited to specific concordant bodies within the group.

Like the Masons, the Odd Fellows are another local secret society whose origins and future are unclear.

Authors such as Joseph Powley have traced the group’s beginnings to Roman times, while official Odd Fellows’ literature points to 18th-century England. Odd Fellows claim their eccentric name was given to them more than 250 years ago by the English public, who believed that individuals extending aid to strangers were “odd.”

The group has been active in Victoria since 1864 and its heritage building on Douglas Street (with its mysterious three-link chain moniker) has intrigued the public since 1887.

Odd Fellows, who are dedicated to “Friendship, Love and Truth,” provided health care and assistance to orphans and widows before Canada’s social safety net was created. They continue to do many different kinds of charitable work, but their capabilities have become limited as their membership has declined.

“There used to be a Lodge in every major town in B.C. and now we’re down to 18,” says Odd Fellow Grand Secretary Dino Fiorin.

“Our peak was pre-World War II. Ever since, we’ve seen a steady aging and loss in membership. Our average age at the moment is between 65 and 70. We have no junior lodges in Victoria.”

Like the Masons, the Odd Fellows require potential members to be of good moral character and believe in a supreme being. A committee of members then assesses candidates.

The membership of Masons and the Odd Fellows are similar, in that membership is based on closely guarded secrets that include passwords for their ranks or “degrees,” and special greetings. Unlike Masons, however, they welcome women to all their organizations.

The Masons and Odd Fellows – two organizations that thrived for so long and have left such an indelible mark on Victoria’s society through architecture, business and charity work (taking care of children, the sick and widowed) – face important questions about how they can ensure their future survival.

This process may involve changing their approach to an issue that has, ironically, brought them the most attention; namely, secrecy.