Catholic Blog: What is it with the Brazilian Church and Freemasons?

The Hermeneutic of Continuity Blog
http://the-hermeneutic-of-continuity.blogspot.com/2012/08/what-is-it-with-brazilian-church-and.html

What is it with the Brazilian Church and Freemasons?

Earlier this year, Rorate Caeli ran a report on Bishop Luiz Demétrio Valentini, Bishop of the Diocese of Jales in Brazil giving an address at the 53rd anniversary of the Masonic Lodge "Colonel Balthazar" in Jales. (In the picture below, he is the one not wearing a tie.) 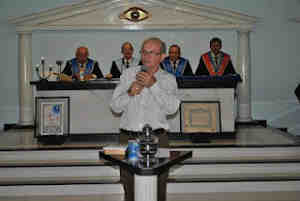 Yesterday, again from Brazil, Rorate Caeli reports on an equally bizarre event, a Masonic Memorial Mass for the "Day of the Freemason", celebrated by Father Geraldo de Magela Silva, of the Diocese of Pesqueira (state of Pernambuco, Brazil.) Here is one of the photos. 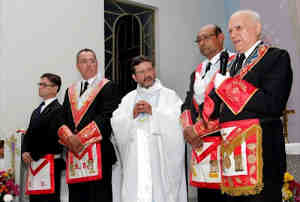 One of the commenters wittily observed that the aprons bear a striking resemblance to the Google Mail logo but I am not going to enter into any conspiracy theories on that score.

Here, thanks to EWTN, is the text of the 1983 Declaration from the Congregation for the Doctrine of the Faith regarding membership in Masonic associations:

Sacred Congregation for the Doctrine of the Faith It has been asked whether there has been any change in the Church's decision in regard to Masonic associations since the new Code of Canon Law does not mention them expressly, unlike the previous code.

This sacred congregation is in a position to reply that this circumstance is due to an editorial criterion which was followed also in the case of other associations likewise unmentioned inasmuch as they are contained in wider categories.

Therefore, the Church's negative judgment in regard to Masonic associations remains unchanged since their principles have always been considered irreconcilable with the doctrine of the Church and, therefore, membership in them remains forbidden. The faithful, who enroll in Masonic associations are in a state of grave sin and may not receive Holy Communion.

It is not within the competence of local ecclesiastical authorities to give a judgment on the nature of Masonic associations which would imply a derogation from what has been decided above, and this in line with the declaration of this sacred congregation issued Feb. 17,1981. [1]

In an audience granted to the undersigned cardinal prefect, the Supreme Pontiff John Paul II approved and ordered the publication of this declaration which had been decided in an ordinary meeting of this sacred congregation.

Rome, from the Office of the Sacred Congregation for the Doctrine of the Faith, Nov. 26, 1983 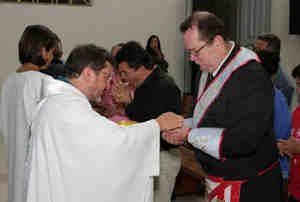 What really puzzles me is that this blatant public co-operation with and promotion of Freemasonry is somehow seen as socialist.