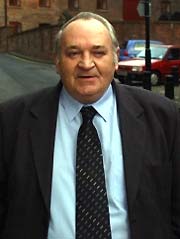 A PERVERT ex-prison officer will not face fresh sex abuse charges – because it is not in the public interest.

But the decision not to prosecute Neville Husband has been slammed by MPs and victims after it emerged the disgraced churchman could walk free from prison within months.

Husband is serving a 10-year sentence for a horrific campaign of abuse on juvenile inmates at the former Medomsley Detention Centre, in Consett, County Durham, in the 1970s and 1980s.

Now, the Chronicle can reveal he was re-arrested after police received new allegations that he went on to molest a boy nearly a decade later inside a different jail.

But, despite gathering enough evidence to take the case through the courts, prosecutors have withdrawn it, claiming that securing a fresh conviction would “not be in the public interest”.

Legal representatives for the alleged victim, who cannot be named for legal reasons, have branded the decision an “insult”, after learning Husband will be eligible for parole in April.

David Greenwood, of York-based solicitors firm Jordan’s, said: “I have to question how it can be in the public interest to discontinue a case where it is alleged a serial abuser has abused another young inmate at a different prison to the one where he committed the crimes he is serving his sentence for.”

Married father-of-one Husband, now 69, of Shotley Bridge, County Durham, ran the kitchens at Medomsley from 1975 to 1981 and later became a minister of Brighton Road and Cromer Avenue URC churches in Gateshead.

It was during his time at the borstal that the Freemason preyed on inmates.

In 2001, five victims broke their silence and told of their ordeal. He was arrested and more than 5,000 images – mostly depicting teenage gay sex – were found on a computer at his Shotley Bridge home and on a laptop in his church study at Bensham, Gateshead.

In 2003, he was convicted 10 charges of indecent assault and one of a serious sexual assault on inmates aged between 16-19. The publicity surrounding the 10-day trial inspired more victims to come forward and in 2005, he was sentenced to a further two years behind bars after admitting attacks on four more boys.

Husband was also investigated for importing gay child pornography into the prison service 10 years before he worked at Medomsley.

The fresh allegation relates to when Husband was seconded as an officer at Deerbolt in Durham on May 1, 1987.

It is understood he left Medomsley and worked at Frankland prison, before being sent to Deerbolt to serve for one month.

Detectives investigated the case and prepared a file for the Crown Prosecution Service. Husband was arrested and charged with indecent assault inside Full Sutton prison and a hearing was scheduled at South Durham Magistrates’ Court.

But at that hearing CPS lawyers told the court they wanted to withdraw the case, despite having sufficient evidence to progress.

A CPS spokeswoman said: “While initially a charge of indecent assault was preferred, consideration was given to whether it was in the public interest to pursue this new matter in view of the existing sentence.

“The decision was made that the public interest did not require the continuation of the present case.

“Accordingly, the proceedings have been discontinued and the complainant has been informed of this by the police.”

Mr Greenwood added: “We will continue the fight for justice. This man is a sexual predator who has taken full advantage of his position and who is to say he won’t do that again when he is released?”

Richard Hall, 44, was one of the victims in Husband’s second prosecution and waived his right to anonymity to speak to the Chronicle.

He said: “I am bitterly disappointed with the decision. I feel for the alleged victim in this case and for all the historic victims of Husband.”

Mr Hall’s MP Nick Brown is backing a call for a public inquiry. North Tyneside MP Stephen Byers has already pushed for the laws on when victims can sue for compensation to be changed.

KEVIN Young was serving a short sentence at Medomsley in 1977 for handling a stolen watch when he was abused by Neville Husband.

Mr Young, 45, of Jarrow, spoke out after a chance encounter with Husband in York city centre brought the full horror of his suffering back to him.

His evidence helped secure a conviction against Husband in 2003 and since then he has set up support group Survivors North East which aims to help all victims of historic sex abuse.

He said: "I know how hard it is to come forward and report an offence of this nature.

"To go through it only to be told there is enough evidence but no further action will be taken is appalling.

"And we understand Husband will be eligible for parole as early as April next year, so it's not as if we can guarantee he will be locked up for 20 or 30 years."