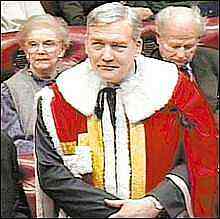 The U.S. government seized almost US$9-million from Conrad Black yesterday, alleging the proceeds of the sale of his apartment on Park Avenue in New York were the result of a fraud scheme.

Lord Black has not been charged with a criminal offence, and a spokesman from the U.S. Department of Justice would not comment on whether charges were pending.

New York-based FBI agents arrived at the real estate closing yesterday and, acting on a civil warrant signed by an Illinois judge, immediately seized US$7,908,687. Earlier yesterday, they seized US$1,020,000 that had been held in escrow as part of the sale.

It is the first such action to be taken against Lord Black, who has been sued by Hollinger International, the newspaper company he formerly controlled, for more than US$500-million.

A source close to Hollinger International said last night that the seizure of proceeds was not initiated in relation to the company's civil lawsuit.

U.S. authorities in August charged David Radler, Lord Black's top deputy, and another former Hollinger International executive with "a systematic fraud on shareholders." Mr. Radler pleaded guilty to federal fraud charges and is co-operating with investigators, but his former boss has maintained his innocence.

A spokesman for Lord Black could not be reached for comment late last night. Efforts to reach Lord Black and his Toronto-based lawyer were also unsuccessful.

Sources close to Lord Black told the National Post in August they expected he would be indicted on the basis of Mr. Radler's testimony, although U.S. officials specifically noted yesterday Lord Black was not charged with a criminal offence.

"The investigation into the conduct of Hollinger executives is ongoing," said Randall Samborn, spokesman for the U.S. Attorney's office in the northern district of Illinois, adding "the affidavit specifically refers to wire fraud."

"This is the first time there has been any direct, specific action directly involving Conrad Black," Mr. Samborn said.

Lord Black and his closest associates have been under criminal and securities investigation in the United States and Canada for allegedly siphoning US$32-million from Hollinger's Chicago-based subsidiary, Hollinger International Inc.

Since Lord Black's legal troubles began, his former media empire has divested newspapers including The Daily Telegraph and the Jerusalem Post. Hollinger International still owns the Chicago Sun-Times and other papers.

Lord Black is the former owner of the Southam newspaper chain and the founder of the National Post.

The affidavits unsealed yesterday allege he exercised an option in December, 2000, to buy his Park Avenue apartment from another Hollinger subsidiary at below market value.

The apartment's fair-market value would have been US$5.4-million, the government said.

But in a complex transaction involving another apartment in the building, Lord Black undervalued the apartment by approximately US$2.4-million, the affidavits said.

He sold the apartment in June for US$10.5-million.

The seizure warrants allege the net proceeds are subject to forfeiture because they are derived from fraud.

Last year, a special committee appointed by Hollinger International accused Lord Black, Mr. Radler and other senior company executives of siphoning more than US$400-million from the newspaper giant, which has sued Lord Black and his top associates for US$542-million.