'E-Masonry's' Freemason of the Year 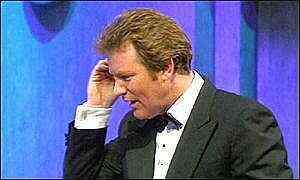 Entertainer Jim Davidson has been made an OBE for his charity work.

The 47-year-old Generation Game host and keen Conservative supporter has spent much of his career travelling around the world to perform for British troops.

In 1998 he set up the British Forces Foundation to raise money to fund forces' entertainment.

Davidson makes much of his roots in south-east London. He was brought up in Kidbrooke, and his old school was just around the corner from his favourite football team, Charlton Athletic.

At the age of 12, he made his showbusiness debut telling jokes in a gang show at the Golders Green Hippodrome, north London - but failed in an audition for the part of the Artful Dodger in the film Oliver!

One Sunday he was in a pub in Woolwich were the regular stand-up comic hadn't turned up. Egged on by friends, he took to the stage, and he never looked back.

In 1976 he won the New Faces talent show on ITV, which got him his own show, The Jim Davidson Show.

Sitcoms Home James and Up The Elephant And Round The Castle followed in the 1980s, while his "adult" pantomimes and comedy tours were equally successful.

In the 1990s he moved to the BBC, and took on the reins of the long-running Generation Game in 1995, which continues to this day.

But off-screen many found his humour, honed in London's pubs and clubs, offensive - although Davidson, a leading Freemason, has denied accusations of racism and homophobia.

In October this year, he dubbed his critics "do-goody, leftie, white, socialist hybrids".

His private life has also overshadowed his career - he has been married four times, with each relationship ending amid acrimony.

He has also suffered from alcoholism, claiming recently that the years from 1971 to 1990 were just one long drinking binge.

In 2001 Davidson will mark 25 years in showbusiness with a series of one-night shows.

Earlier this year, he addressed the Conservative Party conference, receiving a rapturous reception. It had been reported that the party even wanted him to stand as a parliamentary candidate.

This Christmas his company, Effective Theatrical Productions, is producing nine pantomimes, and he is appearing in one of them, in Hammersmith, west London.

Unlike his past efforts, he promises his Dick Whittington version is fit for all the family.

Although he and his critics are unlikely ever to see eye-to-eye, Jim Davidson is showing no sign of turning back.