Gelli deported back to Italy 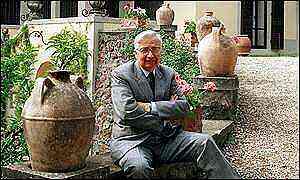 Licio Gelli pictured at his home in Arezzo, Tuscany before he fled Italy

A financier convicted of corruption for his part in the Banco Ambrosiano scandal has been extradited from France to begin a 12-year prison sentence in his native Italy.

Licio Gelli, 79, is a former grandmaster of the P2 (Propaganda-Due) Masonic lodge, which was linked to extreme right-wing groups in the late 1970s and early 1980s.

Gelli was found guilty of fraud arising from the 1982 collapse of the Banco Ambrosiano, which had close ties to the Vatican.

He fled six months ago while on parole at his home in Tuscany but Italian police tracked him down to Cannes on the French Riviera.

Gelli suffered a mild heart attack shortly after his arrest and is then said to have tried to commit suicide while in hospital in Marseille.

On Friday Gelli flew into Rome's Ciampino airport amid tight security and was whisked off to the city's Regina Coeli jail.

Gelli has been periodically on the run since 1981 when he fled to Switzerland after P2 was unearthed during an inquiry into Roberto Calvi, a freemason who was found hanged from London's Blackfriars Bridge.

He was arrested while trying to withdraw tens of millions of dollars from a special bank account in Geneva but escaped from a Swiss prison.

Gelli fled to South America but gave himself up in 1987 and was extradited to Italy.

Banco Ambrosiano was Italy's largest private bank but collapsed with $1bn of debts.

He is also facing a three year sentence in connection with the workings of P2.

Investigations into P2, whose 1,000 members including politicians, businessmen and military officers, have failed to prove the lodge conspired with right-wing extremists and the Mafia to destabilise Italy through bombings and violence