'There was a rhythm to the gatherings' 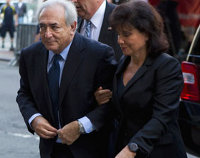 Sex Life Was ‘Out of Step,’ Strauss-Kahn Says, but Not Illegal

PARIS — More than a year after resigning in disgrace as the managing director of the International Monetary Fund, Dominique Strauss-Kahn is seeking redemption with a new consulting company, the lecture circuit and a uniquely French legal defense to settle a criminal inquiry that exposed his hidden life as a libertine.

Mr. Strauss-Kahn, 63, a silver-haired economist, is seeking to throw out criminal charges in an inquiry into ties to a prostitution ring in northern France with the legal argument that the authorities are unfairly trying to “criminalize lust.”

That defense and the investigation, which is facing a critical judicial hearing in late November, have offered a keyhole view into a clandestine practice in certain powerful circles of French society: secret soirees with lawyers, judges, police officials, journalists and musicians that start with a fine meal and end with naked guests and public sex with multiple partners.

In France, “Libertinage” has a long history in the culture, dating from a 16th-century religious sect of libertines. But the most perplexing question in the Strauss-Kahn affair is how a career politician with ambition to lead one of Europe’s most powerful nations was blinded to the possibility that his zest for sex parties could present a liability, or risk blackmail.

On Thursday, Mr. Strauss-Kahn broke a long silence to acknowledge that perhaps his double life as an unrestrained libertine was a little outré.

“I long thought that I could lead my life as I wanted,” he said in an interview with the French magazine Le Point. “And that includes free behavior between consenting adults. There are numerous parties that exist like this in Paris, and you would be surprised to encounter certain people. I was naďve.”

“I was too out of step with French society,” he added. “I was wrong.”

But whether his downfall will have a lasting impact on the culture of sexual privilege and impunity for powerful men in France remains uncertain. He declined to be interviewed for this article.

This month Mr. Strauss-Kahn won a major legal battle after a French prosecutor dropped part of the investigation into an alleged sexual assault at a hotel in Washington. A Belgian prostitute recanted her earlier accusation, saying the encounter was just rough sex play, but Mr. Strauss-Khan is still a suspect for involvement in a prostitution ring.

Buoyed by that first victory, Mr. Strauss-Kahn’s lawyers predict he will triumph in France, where having sex with prostitutes is not illegal, although soliciting and pimping are.

In essence, they argue, there is nothing criminal about the sexual life of a libertine, according to Mr. Strauss-Kahn’s lead lawyer, Henri Leclerc.

That defense may not satisfy the charges in a New York civil lawsuit filed by Nafissatou Diallo, who accused Mr. Strauss-Kahn of sexual assault last year in a New York hotel where she was a chambermaid. Lawyers representing both sides deny there are financial negotiations under way.

“His travels will eventually bring him to a courthouse in the Bronx, where he will face justice,” Kenneth Thompson, the lawyer representing Ms. Diallo, said in an interview.

All of Mr. Strauss-Kahn’s current legal woes in New York and France mixed together last year, with devastating results.

Mr. Strauss-Kahn’s name first surfaced in the French inquiry by chance, in May 2011. French investigators were tapping the telephones of Dominique Alderweireld, an owner of Belgian sex clubs who is also a suspect in the prostitution ring.

In one conversation between Mr. Alderweireld and a longtime childhood friend, René Kojfer, who worked at the Carlton Hotel in Lille, the men were gossiping about Mr. Strauss-Kahn’s recent New York arrest, according to lawyers involved in the case.

They then recalled a freewheeling luncheon in 2009 at a Paris restaurant called L’Aventure, and Mr. Kojfer discussed whether they could make money by offering information about that day to Ms. Diallo’s lawyer, Mr. Thompson, who was never called, the lawyers said.

At L’Aventure, Mr. Strauss-Kahn and a few friends gathered in a private basement club, carpeted in purple and black tiger stripes, with a female Belgian escort and Mr. Alderweireld’s companion, Béatrice Legrain, who recalled that lunch in an interview.

She said that Mr. Strauss-Kahn, energized by Viagra, had sex with the escort and then followed Ms. Legrain to the bathroom, grabbing her and demanding sex. But she said she rebuffed him and it “wasn’t a big deal.” Mr. Strauss-Kahn’s lawyer declined to comment.

In his own interview, Mr. Alderweireld made light of the “petit” episode at L’Aventure. His lawyer, Sorin Margulis, took a more scornful view: “It’s more an act of Louis XIV.”

The investigation into the prostitution ring in Lille ultimately swept up 10 suspects, including Mr. Strauss-Kahn. They knew each other largely through their membership as French Freemasons, according to Karl Vandamme, a defense lawyer who represents Fabrice Paszkowski, the owner of a medical supply company who played a crucial role in organizing the sex parties.

“Libertines are people like you and me: people who have a normal life,” said Mr. Vandamme, who said his client invested around $65,000 in party expenses, betting on the political rise of Mr. Strauss-Kahn.