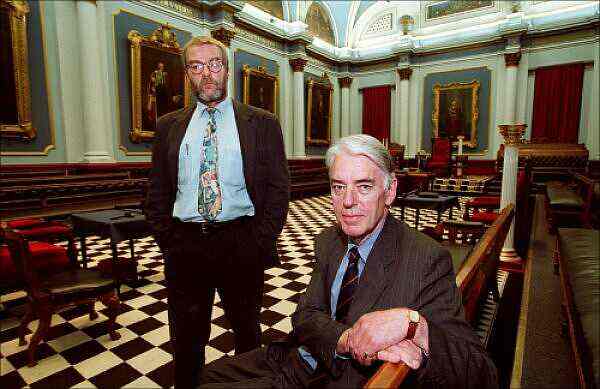 The Irish Times
June 6, 2000
Movers and Shakers
Katie Donovan A Catholic, a Protestant and a Jew, just three of the 33,000 Freemasons in Ireland, tell Katie Donovan how their Grand Lodge, which is celebrating its 275th anniversary this week, is open to people of all religions. Only atheists and women need not apply


You arrive in a strange town, and knock on the door of a certain house. There's a handshake, a few questions. And hey presto, you're in. Sounds ideal, doesn't it? This is what happens if a Mason travels and knocks on the door of a Masonic lodge in a strange town. It is a ritual centuries old, dating back to the origin of Freemasonry as a craft guild of stonemasons. In medieval times, stonemasons were illiterate. They showed a new boss in a new town their qualifications for the job just by being able to shake his hand in a certain way. They met in temporary structures (hence the term lodge) adjacent to the building site. If one of them got injured or killed on the job, the others looked after his wife and dependents.

Freemasons still wear aprons as part of their ceremonial garb, a tribute to their forebears who wore leather aprons to protect their clothes from the rigours of the trade. Stonemasons' tools - such as the compass and the square - still have symbolic resonance in the rituals of the monthly meetings. "We are taught that all our dealings with others should be square - a fair deal for both parties," says Michael Walker, grand secretary of the Masonic Order in Ireland.

"We like to hold on to our traditions but we are not a crowd of fuddy duddies," adds Selwyn Davis, a Dubliner who has been a Freemason for 30 years. Freemasons who were clearly far from being fuddy duddies have included Benjamin Franklin, Oscar Wilde and Clark Gable.

Nowadays there are about 33,000 members in Ireland, North and South, from plumbers to Church of Ireland ministers and Catholic priests. Contrary to popular belief, the Order is not "a middle-class Protestant club" says Selwyn Davis who is chief executive of the Edmondstown Golf Club in Portmarnock Co Dublin. Davis, a Jew, joined the Freemasons 30 years ago. He is now chairman of the Metropolitan Board - meaning he is the leader of the 36 Masonic lodges in Dublin, an annually elected post.

"We are non-religious and non-sectarian," emphasises Davis. "There is only one stipulation, that whatever you are, Muslim, Hindu or whatever, you have a belief in a Supreme Being, in your own God." Freemasons are not allowed to discuss religion or politics at meetings. "It is unfortunate," says Davis, "that people tend to confuse the Freemasons with the Orange Order, perhaps because of the recurrence of the word `lodge' in the two organisations. There is no link whatsoever between the two." There was never a policy of excluding Catholics, says Barry Lyons, assistant grand secretary and librarian with the Order. Lyons is Catholic, and has never experienced any sectarianism: "The organisation was up until recently predominantly Protestant, due to self-imposed withdrawal by Catholic members. In the 19th century, there was a Papal Bull decreeing that the Freemasons (and other secret organisations, with more conspiratorial elements) were off-limits for Catholics. It meant that prominent Catholic Freemasons like Daniel O'Connell had to pull out." Daniel O'Connell described the Freemasons as "philanthropy unconfined by sect, nation, colour or religion", notes Michael Walker.

What sort of people join? Freemasons, says Selwyn Davis, tend to be "doers". They are typically married and settled, and are most likely to be "pillars of their church or community". Charitable concerns are paramount. The Freemasons donate Ł1.5 million per year to 2,500 dependents. These are the wives and children of "deceased or distressed brethren". "We help put children through school, and we have sheltered housing projects for the elderly," says Michael Walker. The Freemasons' charity work also includes raising Ł500,000 to purchase nine minibuses for Alzheimer day-care centres.

OK, the Freemasons seem squeaky clean on all counts so far. But what about the fact that women still aren't allowed to join? "The order was founded by operative stonemasons," says Selwyn Davis. "Can you see ladies hauling stones?" But nobody, male or female, hauls stones nowadays, and the order is still all-male. According to Michael Walker, "we don't get serious inquiries from women."

In Britain, although the United Grand Lodge of England does not accept women, there are several lodges that are women-only and one, the Co-Masons, which is mixed, but "they are not officially recognised by us or by the United Grand Lodge of England," says Barry Lyons. "Until there is a groundswell of objection from the younger members, this men-only policy won't change. I don't know why, but the older men prefer it the way it is."

Women play an important role in fundraising and social events, points out Selwyn Davis: "We enjoy their support. I don't think they feel excluded. It's like I don't feel excluded when my wife goes off to her Mothers' Union meetings. Live and let live."

"Men like to be members of clubs," says Michael Walker. And the Freemasons certainly offer their members an exciting aura of secrecy. In the old days, says Davis, the secrecy came largely from the fact that the Catholic Church disapproved of its members joining. Nowadays, members are much more open about being Freemasons. The purpose-built Victorian Masonic Hall in Molesworth Street is open to the public during the summer. Here you can see the Grand Lodge Room, where every December the grand officers are installed. On the floor is a chessboard style carpet, the black and white squares symbolising the good and evil we encounter in life. Symbols abound, from the cut and uncut lumps of stone (signifying the moral transformation ahead of new candidates) to the gold stars on the blue ceiling (symbolising the fact that early Masonic meetings took place outdoors). There are painted scenes of the construction of King Solomon's Temple, which is the origin of the symbolism of Masonic ritual.

In spite of all this talk of openness, the veil descends when it comes to divulging the exact nature of these rituals to outsiders. Monthly meetings take place behind closed doors guarded by "tylers". Ceremonial aprons and collars are worn, and the stonemason's tools are laid on the "altar". "We parade in, in the order of the officers of the lodge," says Selwyn Davis. "The master opens the lodge in a stylised form, using beautiful old-fashioned English. It's like a play." Meetings involve more prosaic elements such as the secretary's minutes, and a dinner afterwards. Subscription is between Ł30 and Ł50 a year, plus whatever the dinner - which, in Molesworth Street, is provided by caterers - may cost (not more than about Ł10). As for the famous handshake: "I'm obliged not to tell you what the handshake is," says Selwyn Davis. "It's an interconnection of various knuckles and joints," says Barry Lyons, vaguely. "I've never seen it used outside of meetings. A more obvious method of recognition outside of meetings would be a tie or a ring." Initiates - entered apprentice Freemasons - go through three degrees of membership, each of which involves a different handshake.

Freemasons' reluctance to reveal themselves continues to invite speculation that they have something to hide. "The Freemasons are outlawed in Pakistan, because it is seen as a subversive organisation," says Selwyn Davis. During the early 1990s, there were allegations that the Freemasons were infiltrating the RUC. Michael Walker has said that the large number of Freemasons in the RUC was probably because the Masonic lodges were some of the few places an RUC man could socialise in a safe environment, secure in the knowledge that his Masonic brethren would support his wife and family if anything happened to him. "I suspect there are still quite a lot of RUC members, but there are also a lot of gardaí," adds Barry Lyons.

Concerning the Stalker inquiry, Walker has said that he thought it "highly unlikely" that any Masonic influence played a part in ending the mission of the former deputy chief constable of Manchester: "Neither Sir John Hermon nor Sir Hugh Annesley are, or ever have been, Freemasons," he says. "The allegations were proved baseless."

Although Freemasons speak fervently about how moralistic their organisation is, that does not mean it is immune to a few bad apples. The late John Furze, the senior figure at the Cayman Islands end of the secretive Ansbacher Deposits operation (used to defraud the Irish Revenue of millions of pounds from the 1970s to the mid 1990s), was a Freemason. According to the Masonic constitution, "the use by a Freemason of his membership to promote his business, professional or personal interests is forbidden. A Mason's duty as a citizen must always prevail over any obligation to other Freemasons, and any attempt to shield a Freemason who has acted dishonourably or unlawfully is strictly forbidden." "We have procedures for dealing with un-Masonic conduct," says Davis. "It has happened that members have been suspended and expelled."

IN THE 1970s there were allegations in connection with unsolved bomb attacks in Italy that secret service agents, clandestine freemasons (members of the P2 Masonic Lodge), mafiosi and right-wing extremists were conspiring to destabilise Italy to provoke a coup. Renewed "P2" activity was reported in 1992 and connections between the mafia and Freemasons were openly acknowledged. "We don't recognise the Grand Orient of Italy," says Michael Walker. "They are, we believe, involved in politics. Italians find it hard not to be. They are political animals."

The appeal of Freemasonry in Ireland seems to be its exclusion of politics: "Everyone is equal, it's very fraternal, and it's very relaxing to be away from the outside world," Selwyn Davis concludes. Years ago, when Michael Walker went through the trauma of redundancy from his job in a fertiliser company, "the only place I found peace and support was at Lodge meetings".

There are daily public tours of the Freemasons Hall on Molesworth Street, Dublin during the summer, starting on June 12th. Information: 01-6761337