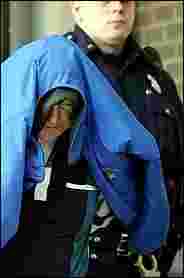 Albert Eid after being arrested and pleading not guilty yesterday in the shooting of another member of his Masonic lodge in Patchogue, N.Y.

PATCHOGUE, N.Y., March 9 — The initiation rituals at the Masonic lodge here had been bathed in secrecy over the years. The climax of Monday night's ceremony was to be a simple prank. A new member of the Fellow Craft Club, a select group within the lodge, would sit in a chair while an older member stood 20 feet away and fired a handgun loaded with blanks.

That ritual went terribly wrong inside Southside Masonic Lodge No. 493, in a basement littered with rat traps, tin cans, a 9-foot-tall guillotine, and a setup designed to mimic walking a plank.

The shooter, a 76-year-old Mason, Albert Eid, was carrying two guns, a .22-caliber handgun with blanks in his left pocket, and a .32-caliber gun with live rounds in his right pocket.

He reached into his right pants pocket, pulled out the wrong gun and shot William James, a 47-year-old fellow Mason, in the face, killing him, the authorities said.

Mr. Eid, a World War II veteran who had a license to carry his own pistol and often did, pleaded not guilty Tuesday afternoon to a charge of second-degree manslaughter and was released on $2,500 bail. He was wearing his blue Masonic jacket during his arraignment in Central Islip.

Suffolk County Police called the shooting an accident, the consequence of one man's confusion. The fatality exposes this secret society, centuries old, to a rare degree of public scrutiny.

Late Monday night, police carried evidence and ritual objects out of the Masons' one-story lodge in Patchogue. All day Tuesday, television reporters and curious neighbors examined the club's bricked-over windows and peered into the front door to glimpse a bulletin board announcing the order's recent charity efforts.

Masonic leaders statewide were quick to disavow the ritual and shooting, saying it was not Masonic custom to shoot guns at other members. Ron Steiner, a spokesman for the New York State Grand Lodge of Free and Accepted Masons, which oversees all Masonic lodges in the state, said the social club was not officially tied to the Masonic organization.

"This is so far beyond the concept of reality it's mind-boggling," Mr. Steiner said. "I've never heard of anything like this."

Mystery and suspicion are woven into the history of the Freemasons, who trace their roots to the stone workers' guilds that built medieval Gothic cathedrals. The guilds evolved into secret clubs over the years with secret handshakes and rituals, and symbols like an all-seeing eye, pyramid and compass.

Over the years, the Southside Masonic Lodge members developed their own initiation rituals for the social club in the lodge that set them apart from most other Masonic organizations, members said. No members of the lodge could remember pistols being used in the rituals (they are not allowed in inside Masonic clubhouses), but some described initiations that were part prank, part exercise in trust.

One member, Michael Paquette, said that when he was initiated into the group five years ago, two mouse traps were placed before him, and he was told that one worked, and one was broken, he said. Another member tested the broken trap, then told Mr. Paquette to touch the live one. He did, and discovered that it, too, was a dud.

"It was really harmless things," Mr. Paquette said. "It was just for you to be there and realize you were in good hands, and you didn't have to fear anything."

On Monday night, Mr. James and Mr. Eid were among 10 men who set to performing the club's initiation.

Mr. James, the first to be initiated, sat down in a chair, and two tin cans were placed on a shelf by his head. The idea was for Mr. Eid to fire two blank rounds, and a man standing behind Mr. James would knock the cans down with a stick. And then it happened.

"This is a tragedy," said Mr. Eid's lawyer, James O'Rourke. "He is absolutely beyond grief-stricken. This is a mistake, not a criminal act."

The Southside Masons are mostly middle-aged or retired men who come from middle-class backgrounds. The group once included about 500 members, but membership here and at other Masonic lodges has fallen over the years, and the group now has about 150 members, said Peter Berg, a member. There are about 67,000 Masons across New York State, and their numbers rose slightly last year, for the first time in a decade, Mr. Steiner said.

Orders like the Southside Masons seem more concerned today with Christmas parties and raising money for blood drives and children's charities than ritual.

While Mr. James had only joined the Southside Masons in December, Mr. Eid had been a member for more than 30 years, other members said.

"He's always there," Mr. Paquette said of Mr. Eid. "He put most of his free time into the lodge."

Fewer Masons knew Mr. James, but officials with the Town of Brookhaven, where he worked for the Planning Department, described him as a friendly man who seemed deeply devoted to his family. Mr. James's wife, Susan, said she had no idea what was happening at the Masons' lodge the night he was shot.

"This is so very sudden, and I'm just very upset," she said outside the couple's home in Medford. "To me, it was just a social thing."