Freemasonry, the Five Points of Fellowship 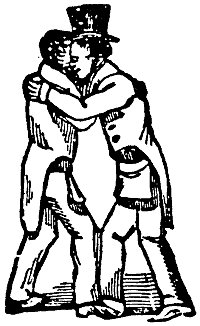 The Five Points of Fellowship 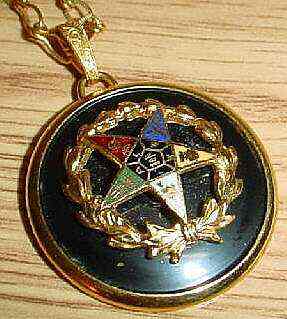 During initiation into the Master Mason Degree, the candidate first receives the Real Grip of a Master Mason, along with instructions in how it is properly communicated, as he is "raised", or resurrected, at the conclusion of the Hiramic Legend. The Worshipful Master, or a lawful designee, reaches down and grasps the hand of the candidate by this grip and "raises" him from the dead to the position known as the Five Points of Fellowship.

The Five Points of Fellowship is demonstrated as the Worshipful Master and candidate embrace one another thusly: foot to foot; knee to knee; breast to breast; hand to back; and cheek to cheek, or mouth to ear. While in this position, and at low breath, the Worshipful Master then whispers "Mah-Ha-Bone" into the ear of the candidate. "Mah-Ha-Bone" is the substitute for the Master's Word. It means, "What, the Builder!". This proper means for an exchange of the substitute for the Master's Word is alluded to in the Obligation of a Master Mason: "Furthermore, I do promise and swear that I will not give the substitute for the Master's Word in any other way or manner than that in which I receive it, which will be on the Five Points of Fellowship, and at low breath."

Whence and Whither the Five Points of Fellowship?

I find every Sect, as far as Reason will help them, make use of it gladly: and where it fails them, they cry out, 'Tis matter of Faith, and above Reason.
—John Locke

¶1 Labeling Masonic and LDS temple parallels "superficial similarities"[1] is specious apologia. Joseph Smith introduced the genetic link between Masonic and Mormon ritual. For instance, Smith told Heber C. Kimball that "Masonary was taken from preasthood but has become degen[e]rated. but menny things are perfect."[2] Taking Smith at his word, one may reasonably conclude that ritual elements Smith borrowed from Masonry were among those "menny things [that] are perfect." Evidence suggests otherwise.

¶2 Consider the Five Points of Fellowship (FPoF). The earliest extant Masonic catechisms prescribe the "points of {the} fellowship" with no accompanying legend:

How many points of the fellowship are ther Ans fyve viz foot to foot Knee to Knee Heart to Heart, Hand to Hand and ear to ear. Then mak

¶3 To simplify, as British Freemasonry absorbed the legend about Hiram Abif's untimely demise at the hands of three ruffians (beginning in rudimentary form by ca. 1720s) "hand to hand" emerged as "hand to back," now for propping up the raised initiate (a.k.a. the deceased Hiram Abif).[4] "Heart to heart" became "breast to breast," "ear to ear"/"cheek to cheek" eventually became "mouth to ear," and the embrace title was standardized to "the five points of fellowship." Only two of the five Points survived from late-1600s to early-1800s unmodified: "foot to foot" and "knee to knee." ¶4 William Morgan documented the Masonic FPoF contemporary with Joseph Smith:

[The Master Mason] proceeds to raise the candidate, alias the representative of the dead body of Hiram Abiff. He (the candidate) is raised on what is called the five points of fellowship, which are foot to foot, knee to knee, breast to breast, hand to back and mouth to ear. This is done by putting the inside of your right foot to the inside of the right foot of the person to whom you are going to give the word, the inside of your knee to his, laying your right breast against his, your left hands on the back of each other, and your mouths to each other's ear (in which position alone you are permitted to give the word), and whisper the word Mahhahbone ... [which] signifies marrow in the bone.[5] 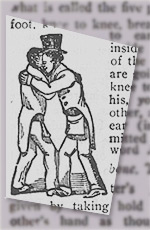 William Morgan, Illustrations of Masonry by One of the Fraternity Who has Devoted Thirty Years to the Subject (Batavia, NY: David C. Miller, 1827), 84.

¶6 The antebellum FPoF emerged from a rich historical evolution. From this Masonic trajectory, Smith copied the FPoF into his temple ceremony:

¶7 As in the Masonic rite, the "name" associated with the Mormon FPoF also included the phrase "marrow in the bones."[7]

¶8 Smith's adaptation isn't too astonishing since he adamantly affirmed that Masonry preserved authentic ancient ritual.[8] Smith was wrong. Indeed, Smith's weaving of the Masonic threads is more like a patchwork quilt than a seamless garment—ideational aporias are evident throughout the LDS ritual. For instance, the phrase "Five Points of Fellowship" with all its Masonic nuances carries no real meaning in Smith's Endowment. And the "name" ("word" in Masonry) associated with the FPoF is the definition of the name in lieu of the name itself.[9]

¶9 In April 1990 the LDS hierarchy removed the FPoF (along with other Masonic elements) from the temple Endowment, thus ending the Points' stint as a salvific act for Mormons.[10]

¶10 From this picture emerge probing historico-theological questions. If the temple ceremony were ancient and Masonry degenerated priesthood, pre-1800 Masonry should resemble Smith's temple rite more than post-1800 Masonry. Yet the opposite is the case: pre-1800 Masonry is gradationally more dissimilar to the Mormon ritual.[11]

¶11 Hugh Nibley's examples of Egyptian embraces[12] pale in comparison to the identical congruity between the Masonic and LDS embrace. Nibley's ritual verisimilitude also suffers from the lack of a coherent theory of ritual interdependence. Smith's Points clearly owe their genealogy to 19th-century Masonry, not some antediluvian tradition.[13]

¶12 Thoughtful examination of Masonic ritual yields a fascinating glimpse into Smith's eclectic use of his environment in Restoration rites.[14]