The souls of Bolshevism's millions of victims cried out for justice but for Brother F.D.R. Stalin still remained 'Uncle Joe' 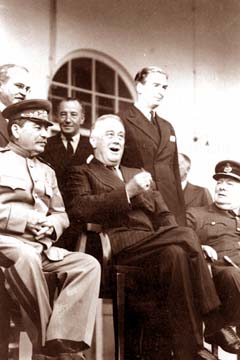 Five years ago, I wrote about the unknown Holocaust in Ukraine. I was shocked to receive a flood of mail from young Americans and Canadians of Ukrainian descent telling me that until they read my column, they knew nothing of the 1932-33 genocide in which Josef Stalin's Soviet regime murdered seven million Ukrainians and sent two million more to concentration camps.

How, I wondered, could such historical amnesia afflict so many? For Jews and Armenians, the genocides their people suffered are vivid, living memories that influence their daily lives. Yet today, on the 70th anniversary of the destruction of a quarter of Ukraine's population, this titanic crime has almost vanished into history's black hole.

So has the extermination of the Don Cossacks by the communists in the 1920s, the Volga Germans in 1941 and mass executions and deportations to concentration camps of Lithuanians, Latvians, Estonians and Poles. At the end of World War II, Stalin's gulag held 5.5 million prisoners, 23% of them Ukrainians and 6% Baltic peoples.

Almost unknown is the genocide of two million of the USSR's Muslim peoples: Chechens, Ingush, Crimean Tatars, Tajiks, Bashkirs and Kazaks. The Chechen independence fighters who today are branded as "terrorists" by the U.S. and Russia are the grandchildren of survivors of Soviet concentration camps.

Add to this list of forgotten atrocities the murder in Eastern Europe from 1945-47 of at least two million ethnic Germans, mostly women and children, and the violent expulsion of 15 million more Germans, during which two million German girls and women were raped.

Among these monstrous crimes, Ukraine stands out as the worst in terms of numbers. Stalin declared war on his own people in 1932, sending Commissars V. Molotov and Lazar Kaganovitch and NKVD secret police chief Genrikh Yagoda to crush the resistance of Ukrainian farmers to forced collectivization.

Ukraine was sealed off. All food supplies and livestock were confiscated. NKVD death squads executed "anti-party elements." Furious that insufficient Ukrainians were being shot, Kaganovitch - virtually the Soviet Union's Adolf Eichmann - set a quota of 10,000 executions a week. Eighty percent of Ukrainian intellectuals were shot.

During the bitter winter of 1932-33, 25,000 Ukrainians per day were being shot or died of starvation and cold. Cannibalism became common. Ukraine, writes historian Robert Conquest, looked like a giant version of the future Bergen-Belsen death camp.

The mass murder of seven million Ukrainians, three million of them children, and deportation to the gulag of two million more (where most died) was hidden by Soviet propaganda. Pro-communist westerners, like The New York Times' Walter Duranty, British writers Sidney and Beatrice Webb and French Prime Minister Edouard Herriot, toured Ukraine, denied reports of genocide, and applauded what they called Soviet "agrarian reform." Those who spoke out against the genocide were branded "fascist agents."

The U.S., British, and Canadian governments, however, were well aware of the genocide, but closed their eyes, even blocking aid groups from going to Ukraine.

The only European leaders to raise a cry over Soviet industrialized murder were, ironically and for their own cynical and self-serving reasons, Hitler and Italian dictator Benito Mussolini.

Because Kaganovitch, Yagoda and some other senior Communist party and NKVD officials were Jewish, Hitler's absurd claim that communism was a Jewish plot to destroy Christian civilization became widely believed across a fearful Europe.

When war came, U.S. President Franklin D. Roosevelt and British PM Winston Churchill allied themselves closely to Stalin, though they were well aware his regime had murdered at least 30 million people long before Hitler's extermination of Jews and gypsies began. Yet in the strange moral calculus of mass murder, only Germans were guilty.

The British-U.S. alliance with Stalin made them his partners in crime. Roosevelt and Churchill helped preserve history's most murderous regime, to which they handed over half of Europe in 1945.

After the war, the left tried to cover up Soviet genocide. Jean-Paul Sartre denied the gulag even existed.

For the western Allies, Nazism was the only evil; they could not admit being allied to mass murderers. For the Soviets, promoting the Jewish Holocaust perpetuated anti-fascism and masked their own crimes.

The Jewish people, understandably, saw their Holocaust as a unique event. It was Israel's raison d'etre. Raising other genocides at that time would, they feared, diminish their own. This was only human nature.

While today, academia, the media and Hollywood rightly keep attention focused on the Jewish Holocaust, they mostly ignore Ukraine. We still hunt Nazi killers, but not communist killers. There are few photos of the Ukraine genocide or Stalin's gulag, and fewer living survivors. Dead men tell no tales.

Russia never prosecuted any of its mass murderers, as Germany did.

We know all about the crimes of Nazis Adolf Eichmann and Heinrich Himmler; about Babi Yar and Auschwitz.

But who remembers Soviet mass murderers Dzerzhinsky, Kaganovitch, Yagoda, Yezhov and Beria? Were it not for writer Alexander Solzhenitsyn, we might never know of Soviet death camps like Magadan, Kolyma and Vorkuta. Movie after movie appears about Nazi evil, while the evil of the Soviet era vanishes from view or dissolves into nostalgia.

The souls of Stalin's millions of victims still cry out for justice.