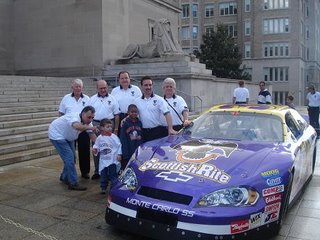 Frank Cicci, of Frank Cicci Racing, alleges that driver Brian Conz and the Scottish Rite have defaulted on their contract with him to run the full Busch Series schedule.

Scottish Rite, an appendant body of American Freemasonry, was to sponsor Conz as driver of Cicci's cars this season. Conz has yet to run a race because he was not approved by NASCAR to run Daytona or California.

Frank Cicci Racing hopes to run Jay Sauter in its No. 34 Chevrolets for the rest of the 2007 Busch Series season. Sauter drove in last Saturday's Stater Bros. 300 race, sponsored by Amsoil, in a car not showing the Masonic symbols.

SceneDaily.com reported today that on an unnamed website, a posting attributed to Conz said he and the Scottish Rite are negotiating with "new team affiliations," and will make an announcement soon.

"It's a bit disturbing to read the press release that BC Motorsports [and the Scottish Rite] is seeking affiliation with another team when they still have a binding contract with FCR," Cicci said in a statement.

Brian Simo will drive Cicci's car this weekend in the Telcel Motorola Mexico 200 in Mexico City. Sauter will be in the No. 34 the rest of the year, if Cicci finds new sponsorship.

The Frank Cicci Racing statement said Cicci has retained legal council against BC Motorsports and Brian Conz for default and non-payment according to the terms of a binding contract that commits them to a 35 NASCAR Busch Series race schedule with Frank Cicci Racing [emphasis mine].

"Non-payment" would mean that Scottish Rite was supposed to pay Frank Cicci for their sponsorship, which makes sense. We speculated in January that a typical NASCAR sponsorship could cost a company $10,000,000.00 or more. After we and others began questioning Scottish Rite about how much they paid for the sponsorship rights, they said they had paid nothing, and were just offering "support." If Levanduski is correct, that there has indeed been a breach of contract regarding payments due, then was the Scottish Rite merely mincing words when they said they hadn't paid for the sponsorship rights, meaning, they hadn't paid yet? It would seem from Cicci's threat of lawsuit that Scottish Rite may indeed owe Cicci some cold, hard cash. Stay tuned....

Jan. 23 — NASCAR fans more loyal to sponsors than in any other sport

Feb. 11 — What will future historians think of the Scottish Rite-NASCAR partnership?

The 'Scottish' Rite - 33 Degree's of Familiarization