Senator John McCain has endorsed Massachusetts Governor Mitt Romney for the Republican presidential nomination after he won the Iowa caucus.

John McCain made the announcement in New Hampshire, a state that he won in both the 2000 and the 2008 primaries when he himself ran for the Republican nomination.

He cut right to the chase: "I'm here for one reason and one reason only: that we make Mitt Romney the next president of the United States." 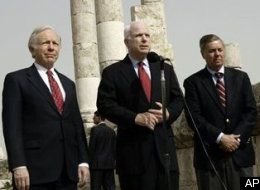 that was soo cool! my teacher got me and my friends? on the gazebo behind him! to bad he lost....


this rally was sweet. if anyone saw kids in white? t-shirts that had red letters on them let me know. i was one of those kids. together we spelled out "VOTE MCCAIN"


Straight? Talk Express! are you serious???? McCain has lied to us more times than i care to think about.....and over 1 hour late im suprised he showed up thought maybe he was gonna do another lettermen (haha) he is Crap


I love the name of his bus - "Straight Talk Express!"

Hope McCain/Palin win big! I can't wait to vote for him. (And I'm a? FORMER democrat. After this race, I wont be a democrat again, because my old democratic party is DEAD).