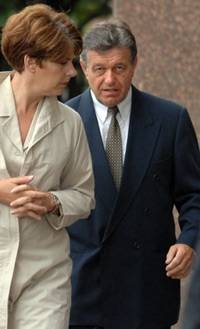 A THIEVING former police chief has escaped jail for a second time – despite lying to magistrates over his failure to pay compensation to the victims of his fraud.

In January 2006, Mick Butcher, who was a police officer for 30 years, admitted stealing more than Ł25,000 from a golf club where he was company secretary.

A judge gave Butcher a suspended prison sentence on the understanding that he would use the proceeds of a house sale to pay back the money by April 2006.

But yesterday a court heard the former South Yorkshire Police chief inspector used the money to buy a house in France instead, missing the deadline set for the payment of compensation.

Butcher, 58, was brought before magistrates to explain his default, but failed to mention the earlier payment arrangements and claimed he was having trouble getting a loan.

Magistrates then told him to pay the compensation at a rate of Ł750 a month, but earlier this year, police found out about the house in France and charged Butcher with perverting the course of justice.

Butcher admitted the charge, but sitting at Sheffield Crown Court yesterday, Mr Justice Holland said sending Butcher to prison would be not be in the interests of his victim, golf club owner Herbert Wistow.

Instead, he deferred sentence for six months and told Butcher to pay the compensation in full to Mr Wistow, who owns Sandhill Golf Club, at Little Houghton, Barnsley, in that time.

David Brooke, prosecuting, told the court: "On April 11, 2006 he appeared before the magistrates at Barnsley after failing to pay the compensation. He made no mention of the house he had bought.

"He said he was having trouble arranging a bridging loan to pay back the money. He gave a false impression of his circumstances to the magistrates who gave him longer to pay the compensation.

"Subsequently the police discovered what had happened and decided to pursue the matter, that is how he ends up here facing a charge of perverting the course of justice."

In mitigation, Robert Sandford said that Butcher, of Lepton Gardens, Stairfoot, Barnsley, had now paid around Ł16,000 to his victim.

He added: "He understands what the consequences will be if he fails to pay this compensation within six months."

Mr Justice Holland said: "Just for once I am going to give priority to the interests of Mr Wistow and I will defer sentence for six months. But if the compensation is not paid, there will come a time when the interests of justice must take over."

Butcher got his job at the golf club after the pair met at a freemasons' lodge. Mr Wistow said he trusted him because he was a police officer and senior lodge member.

But yesterday, Mr Wistow said he was "disgusted" that Butcher had not been sent to prison the first time and was "shocked" that he had escaped a second.

He added: "It seems to me like the laws are all for wrongdoers. He should be made to sell his house in France to pay us back and go to prison for lying and stealing from us.

"We have only just managed to survive after what he did. If we hadn't have caught him when we did we would have gone under and put 11 people out of work."

The full article contains 575 words and appears in n/a newspaper.