Ex-head of shady lodge thought to have ordered Mafia hit 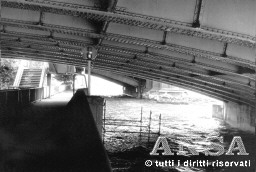 Gelli, 86, is suspected of commissioning the murder .

Gelli's lawyer said his client was "amazed" at press leaks of a questioning session earlier this month .

The lawyer denied Gelli's alleged statement that police should "look to Poland" for those who ordered the banker's murder 23 years ago .

Four people face trial in October for the murder of Calvi, found hanging from Blackfriars' Bridge in London in June 1982 .

Calvi, whose death was originally ruled a suicide, is now thought to have been murdered in revenge for not paying back laundered money to the Mafia .

Judicial sources said there were at least three motives for Calvi's killing, which was originally ruled a suicide .

These included Calvi's mismanagement of Mafia money; the possibility that he would reveal how it was laundered by his Banco Ambrosiano; and to gain leverage among Calvi's network in legal masonic lodges, Gelli's subversive Propaganda Due (P2) lodge, Vatican bank Istituto per le Opere di Religione (IOR), political and institutional figures, and public-sector agencies .

Several more people are still under investigation for the murder. In London, British police reopened the inquiry into the death after the Italian indictments were first sought two years ago .

Potentially incriminating documents were stolen from a Rome lawyer's office a year ago .

British forensic experts last year determined that Calvi could not have climbed out onto a scaffold under the bridge .

The British police now believe that Calvi, former head of Italy's biggest private bank, was killed by the Mafia at a nearby building site and his body hung under the bridge .

Back in Italy, prosecutors tracked some 1.3 billion dollars through the offshore units of Calvi's Banco Ambrosiano in the run-up to his death .

The money and its movements, judicial sources said, were "directly linked" to Calvi's death .

A bank deposit box in Calvi's name, found in the course of the investigation, also had a "significant" link to the murder, they said .

Prosecutors reconstructed "complex company operations" and huge movements of money through Banco Ambrosiano subsidiaries in Panama, the Bahamas, Peru, Nicaragua and other countries .

The investigation into the death of Calvi, who earned his nickname by working closely with IOR, was re-opened six years ago .

Calvi's body was exhumed and a new autopsy performed during the reopened investigation, in December 1998, but no conclusive evidence was found .

Calvi's family said they believed he had been murdered. They pointed to one of his final remarks: "People kill for things like this." Calvi was found hanging under the well-known London landmark with his pockets full of banknotes and bricks. The suicide verdict came a few months after his death .

Despite the British coroner's verdict, in 1997 Rome prosecutors placed Calo', jailed in 1985 on Mafia charges, and Carboni under investigation in connection with the banker's death .

Calvi was a leading light in Italian banking circles for many years. In 1975 he became chairman and managing director of the Banco Ambrosiano, Italy's biggest private bank .

According to theories aired over the years by informants, Calvi worked hand-in-hand with Mafia-linked banker Michele Sindona - killed in jail by a poisoned cup of coffee in 1986 - to set up a complicated web of banking and insurance interests .

Many paths were allegedly smoothed by his association with Gelli, currently serving 12 years for the Ambrosiano collapse .

He has been under house arrest at his Tuscan villa for the last six years .

(UPI) Italian magistrates have informed an 86-year-old man in Rome they are investigating his connection with the 1982 death of "God's banker," Roberto Calvi.

Four people already in prison face trial in October for the killing of Calvi, found hanging from a bridge in London in June 1982.

Gelli denies he was involved, but has acknowledged that the financier was murdered. He said he had known Calvi since 1975, but that he had few dealings with Calvi's Banco Ambrosiano, the collapse of which in 1982 sent Calvi fleeing to London.

Calvi earned his nickname because of his banking links with the Vatican. His death was originally ruled a suicide, but the case was reopened six years ago. His death is now thought to have been carried out in revenge for not paying back laundered money to the Mafia.