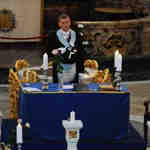 Edit: this is from the German district web-page on the historic meeting of Freemasons, for the first time taking place in a church.

Even though the "brothers" were strenuously advised that only limited press photos were allowed, one pius-info reader took some private photos.

Normally the church holds a Feastday protestant Liturgy, but clearly those responsible for church of St. Michaelis find the Freemasonic convent more important than their own community, which was in any case excluded from the event. (see photo)

It was the first time that such a Freemasonic ritual has taken place in a church in Germany.

The pius-info photography shows: "The ceremony of light with the giving of the candles follows the ritual wall conducted with much tapping and clapping three times to greet the brothers from abroad, alltogether very comical and middle-class, but deadly serious." 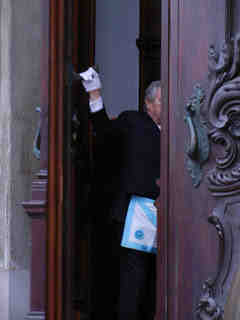 The following press release was to be read in the news "Die Welt":

1,500 Freemasons from all over the world conducted a solemn Masonic ritual in Hamburg's main church ST. Micehalis (Micheal). It was the high point of the celebration of the 275 year existence of German Freemasons -- in Hamburg, the first Masonic Lodge, "Absalom zu den drei Nesseln" (Absolom of the three Nettles) was founded. 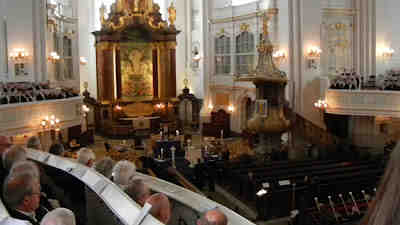 Interior of the Protestant church: Everything is Adapted to the Masonic Ritual

Freemasonry has been condemned by the Church for centuries.

Freemasons Cast a Long Shadow on the Elysee Palace

Is Vienna's Cathedral Pastor a Freemason?

I was a Freemason -- The Destructive Effects of Masonic ...

Photo in the linked article shows their presider at his table. Cloth, candles, flowers, books, etc in front of him as he does his ugly little ceremony towards the people. At first I thought he was doing the Novus Ordo. You can understand my confusion. Reply

The Novus Ordo has the same meal table as them. Well, the Freemasons have infiltrated everywhere including the Vatican, etc. Reply

Ever wonder how they came to be called "masons"? Builders? Or why they would have "temples"? Freemasonry was started by the Synagogue of Satan. The same Jews who then and now still reject the Corner Stone, who try to reign supreme as gods in this world and have been the cause of social disorder around the globe. Reply