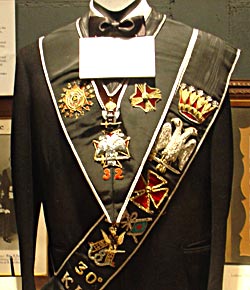 Freemasons are usually quite secretive about their doings, but the Kalgoorlie-Boulder branch of the worldwide fraternal organisation has put some important pieces of regalia on display at the WA Museum.

“It’s pretty uncommon to have such a display,” agrees Doug Daws, who is a member of the local Lodge Sir William Wallace. But while it might be uncommon, it’s not necessarily unwelcome within the organisation itself. “We’ve had the grand master mason of the Scotland Freemasonry come to Kalgoorlie and he was pretty excited, not at all disappointed,” says Doug. It seems that after a long time of being rather private and closed about their organisation that there is a move amongst Freemasons to open up a bit more to the public. And looking at the display at the museum, there is no reason to be closed, rather on the contrary. “It tends to show the richness, the diversity and the general overall colour and character of a very proud organisation,” says Doug.

The items on display at the museum include boxes with Masonic jewels and badges, booklets from installation ceremonies and other items such as Masonic tools. The display is special because of its uniqueness, but it also carries monetary value. “The historic jewels that are on display here are all made of gold,” explains Doug. Not unusual considering that it was gold that started the development and exploration of the Goldfields region. “Lots of the gold ended up in Freemasons jewels, which in some cases were just melted down in the past,” says Doug. Quite a shame considering that it’s not just the value of gold that makes the items on display so special. “Because of the craftsmanship and the rarity, they are worth thousands of dollars per item.”

Masons are classified by degrees with everyone starting off at the first degree going up to the 33rd degree. “Not many people ever achieve that 33rd degree, it’s very rare around the world,” says Doug. But there are some 32nd degree masons living and working in Kalgoorlie-Boulder. There’s no need though to be up that high to enjoy the benefits of being a Freemason. “At the third degree you become a Master Mason and you are therefore entitled to all the privileges and benefits,” explains Doug.

With the Freemasons being all over the world you never quite know where you might find a brother, especially in times of need. “ If you had some problems you would identify yourself as a Freemason and would receive aid under certain circumstances,” says Doug. And if you aren’t in need it still is exciting to meet someone in another country, who shares similar views and values. “Just the sheer joy of attending the meetings of your brothers in Freemason is something that is restricted to the few that belong.”

It is said that many successful and rather prominent people are Masons. In our region well known Warden John Finnerty, who was the first resident magistrate of the Coolgardie Goldfields, was a Mason and some of his Masonic tools are on display. “The set of working tools is pretty standard for Freemason Lodges and they are representative of all the tools that might be used by operative masons, someone who is working with stone,” says Doug. Finnerty’s tools include a silver chisel, a pencil and a 24 inch ruler. “It’s symbolic to indicate the 24 hours of the day, which we say should be carefully split up to 8 hours of work, 8 hours of sleep and 8 hours of recreation.” It looks like these Masons aren’t as much secretive as smart.