Is George Osborne the worst chancellor?

In our latest roundup of questions suggested by Google for people or stories in the news, we find out a little more about chancellor George Osborne 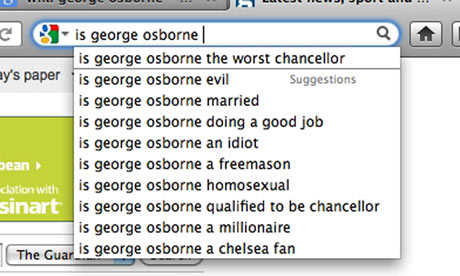 Is George Osborne the worst chancellor?

As in worst chancellor of the exchequer ever? Probably not. There have been some real clowns. Conservative chancellor George Ward Hunt, for example, back in 1869, who turned up in parliament to deliver his budget, opened the red briefcase and realised he had forgotten to bring his speech. Osborne, as far as we know, has never done this, although you do see some of his policies and think: "He must have made that up in the car."

He is. He married best-selling author Frances Victoria Howell, daughter of Baron Howell of Guildford, on 4 April 1998.

He's doing a great job: on top of a Ł134,565 salary he gets two free houses, a chauffeur and a ceremonial robe. Is he doing a good job of his great job? Debatable. On the one hand, today's ONS estimates suggest the economy grew 0.3% in the first quarter of 2013. On the other, borrowing is up, we've flatlined for two years and you can no longer get through a day without watching an ad for payday loans. So, on balance, no.

Is George Osborne an idiot?

Would an idiot do this? Yeah, probably.

Is George Osborne a freemason?

Maybe. He has definitely attended the secretive meetings of the Bilderberg Group, an organisation described on the Freemasonry Watch blog as "founded and controlled by Freemasons". So on second thoughts: yes, definitely. And probably also an alien and a ghost.

He has a wife and two children, so probably not. But sexuality is more of a spectrum than a binary value, so he probably gets at least a faint buzz of arousal when he thinks about Michael Fassbender. But then, of course, who doesn't?

Is George Osborne qualified to be a chancellor?

In response to a 2011 Freedom of Information request about the necessary qualifications for the role, the Cabinet Office explained: "There is no set financial criterion which the appointee must hold." If we infer from this that a chancellor requires no financial expertise whatsoever then Osborne isn't just qualified: he's perfect.

Is George Osborne a millionaire?

Of course. His personal fortune is estimated at Ł4m, made up mostly of property and a 15% stake in his dad's fancy wallpaper business.

Is George Osborne a Chelsea fan?

The football club? Apparently. The wealthy London borough and its super-rich inhabitants? Evidently.