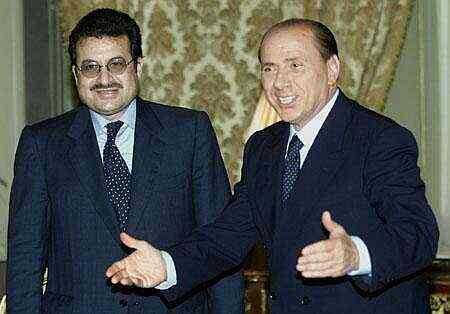 ROME (Reuters) - Italian Prime Minister Silvio Berlusconi has been hit with fresh criticism after he accused the press of conspiring against him and of inventing recent comments he made apparently belittling Islam.

Newspaper editorialists and political commentators said on Wednesday that the billionaire politician had gone too far in trying to cover up for his remarks last week, when he enraged the Muslim world by saying Western civilisation was superior to Islam.

After initially saying he was misunderstood and his words were taken out of context, Berlusconi on Tuesday met Muslim diplomats to try to explain himself further and told an Arab newspaper he was the victim of a left-wing conspiracy.

He told Muslim ambassadors and senior diplomats that the controversial comments in which he claimed "the superiority of Western culture over Islam" had been "falsely attributed" to him and that "he had never spoken such words".

In an interview with Arab-language daily Asharq Al-Awsat published the same day, Berlusconi, who heads a conservative coalition, said the phrases attributed to him were made up by left-wing journalists in an attempt to discredit him.

"There are certain left-wing people in the Italian press who want to tar my image and destroy my enduring relations with Arabs and Muslims," Berlusconi was quoted as saying.

In a further effort to try to clear his name, the media baron handed each of the Muslim diplomats a copy of a transcript of the comments he says he did make a week ago in Berlin, excluding all but one of the offending remarks.

He also played them a tape-recording of him speaking in Berlin, but the tape again allegedly excluded all but one of the disputed comments, Italian newspapers said.

Sources at embassies whose ambassadors were present at the meeting confirmed that transcripts were handed out and contained only one controversial remark, but would not confirm that a tape was played.

"We were explicitly asked not to discuss with the press any matters pertaining to the meeting," an official at one of the embassies said.

Newspapers and political commentators said Berlusconi had gone too far in trying to cover up for himself.

"Everyday, Berlusconi becomes an increasingly dangerous person, not just in the eyes of the national media, but in the embassies and pressrooms of the whole West," the left-leaning La Repubblica said in an editorial headlined: "The lies of Silvio".

Corriere della Sera newspaper said: "He is doing everything possible to try to put this huge problem behind him."

Roger Eatwell, a professor of European politics at Bath University in Britain, said he thought Berlusconi was panicking "This is not normal political practice," he said.

James Walston, a professor of Italian politics at the American University in Rome, said Berlusconi seemed to be desperate to appear right.

"He's not a fascist and he's not Mussolini, but they used to say of Mussolini 'Il Duce ha sempre raggione', 'Il Duce is always right', and Berlusconi seems to feel the same way," Walston said.

Others agreed that Berlusconi may have gone too far, but they saw it doing little damage to his popularity within Italy.

"Most politicians have fallen into this sort of trap," said Sergio Romano, a political commentator and ex-ambassador to Moscow, adding that it wasn't the first time for Berlusconi.

"But he's merely reflecting public opinion... He's probably more popular now than he was before he said these things."

Many have witnessed time and again the strange phenomenom of Masonic Cognitive Dissonance - the habit of denying and lieing about statements they have made, authentic Masonic Documents and practices, and Historical Facts regardless of the number of witnesses or proofs given.

There is some deep psychological disturbance, a complete seperation from reality, that occurs within those involved with Freemasonry and other Occult Initiatory Orders.

We believe it is a form of shock, where like someone who has suffered a deep trauma in their life blots it out and denies it occured.