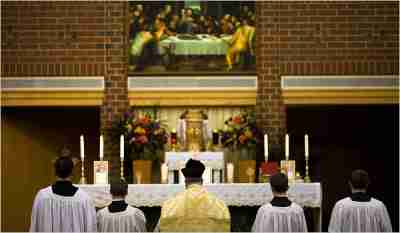 MERCHANTVILLE, N.J. ù Kelly Rein, 16, used to spend most Thursday nights doing homework. These days, Kelly wears a lace mantilla over her striped T-shirt and stovepipe jeans and attends a class on the traditional Latin Mass.

ôI always attended the English Mass, but I never really paid much attention,ö said Kelly, who took her parents and sisters to St. Peter Roman Catholic Church in this suburban Philadelphia town, where the first traditional Latin rite is scheduled for December.

At a Catholic summer camp, Kelly was struck by the reverence of the Latin Mass.

ôItÆs quiet,ö she said. ôPeople are paying attention. In the English Mass, itÆs noisy. There are babies crying. But here people are completely focused on God.ö

More than 40 years ago , the groundbreaking Second Vatican Council introduced Mass in the vernacular, sending the Latin Mass into disuse and alienating some Catholics.

But last summer, Pope Benedict XVI eased restrictions on the rite, and new celebrations of the Latin Mass are flowering. To the surprise of many, the rite has attracted priests and parishioners too young to have experienced the Latin Mass when it was the norm.

For adherents of the traditional Latin Mass, the interest of young people is proof of its enduring resonance and offers hope that it may revitalize an American church struggling to hold on to the young.