Le Nouvel Observateur: No, Freemasonry has never worked in the shadows to sink the state. GODF Member gives insiders view

No, Freemasonry has never worked in the shadows to sink the state

MOST. Freemasons make their return to the "one" of the Nouvel Observateur and Le Point. Chestnut or true leaders of the shadow? Lawrence Kupferman, essayist and member of GODF gives an inside view of Freemasonry, with its subtleties, its values ??and its actual weight. 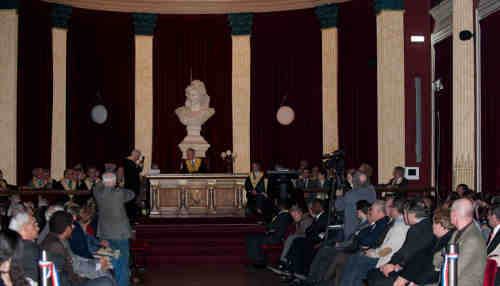 FREEMASON. After the holiday season, vows, here comes the season of chestnuts on Freemasonry causing an ambivalent feeling among the Sisters and Brothers. On the one hand, there is something flattering in fact be a recurring way of "a" serious and respectable magazines. We can however help thinking it must be seen as more of a concern to increase sales and draw a real tribute.

Beyond this aspect, the sisters and brothers can sometimes be annoyed by the rain which conveys more information clichés that the reality of the Masonic practice.

Above all, it is a misnomer to speak of Freemasonry when we want to stick to reality. It should say the Franks-Masonry. Do not see there a desire to cleave, but rather to comply with two major pathways by masons. There is the original track and the liberal way.

For comparison, Protestants and Catholics are Christians. They are not less different despite the many links they share. So is there any masons.

Very schematically, the proponents of the primitive path, one that respects all the "Landmarks" (principles) of origin, want in a practice that focuses on esoteric questions, symbolic and spiritual. In addition, they do not initiate women.

The liberal approach applies the method of reflection and Masonic building for more societal. And it introduces women.

Let there be no mistake, the traditional masons do not live isolated from the world. And those GODF (Grand Orient of France) can work - if they wish - under the auspices of GADLU (Great Architect Of The Universe), ie a fairly traditional way.

This long preamble to say that Masons Masonry live as an individual and collective adventure. These different ways can sometimes quarrel ... in brotherhood course!

But these objections are sterile because they have much the same purpose: to liberate man from his chains and his passions.

Ways and means by which they actually correspond to different sensitivities of human nature. Thus he is their involvement in the life of the city.

The liberal approach is more likely part in societal affairs if it considers that certain basic principles are involved (see the press GODF on marriage for all ). Sometimes these stances displease some brothers and sisters. They forget that Obediences only take principled positions for which they are not linked. In all masonry, freedom of conscience is absolute.

In our recent book ("What France is the Freemasons and it should not their" First edition, 2012), we have listed and explained the specific contribution of Freemasons in France.

Basically, their job was to convey the ideas developed by the philosophers of the Enlightenment in the concrete. It is easily forgotten today that the school was in the hands of congregations there just over a century, and that the bishops had the right to revoke the teachers who deviated from the line of knowledge accepted by the churches.

Who remembers that divorce by mutual consent was impossible, or reserved for the elite? We forgot that cremation, under the principle of resurrection of the body, was banned by the Church. Who knows that it is mainly the Lodges that brought the mutualism, which protects life accidents (not forgetting the real action, but stifled by the conservatism of the Church, Catholics as the Earl of Villeneuve-Bargemont thinkers supporter and developer of a progressive social Catholicism).

It is obviously tempting, in times of crisis, to see the black hand of the plot, rather than face social realities, and other ethical lapses, where we find the most appropriate way to correct answers.