A new letter to Nicolas Sarkozy Franēois Stifani circulating on the Internet, among former members of the GLNF, and we reveal here. Dated 24 January 2008, the letter of the former Grand Master of the President of the Republic is on "positive secularism" ... and offer "support our Obedience".

This old mail almost five years now navigates through electronic channels should probably not much to chance. Former Grand Master Franēois Stifani suspended GLNF December 4 , was invited January 17 to 14 hours to explain the objections raised by his successor. The invitation was sent by mail RAR, simple letter and fax by the Sword Grand Jean-Pierre Guyonnet. The appointment is available at the Chambers of Guyonnet, which as Stifani, is a lawyer. During a recent hearing , Guyonnet had attended 13 dignitaries (including Claude Charbonniaud) on a voluntary basis to intervene in support of Ms. Monique Legrand .

The letter to Sarkozy Stifani we reveal today has been shipped less than two months after installation as Grand Master of Stifani (December 2007), the successor to Jean-Charles Foellner. It follows the controversial speech L'Elysée tenant, those of Rome and Riyadh. Stifani wrote that "spirituality is for decades a strong aspiration of our contemporaries", the GLNF "is only in France the spiritual power of Freemasonry" ... The conclusion is certainly what is most extraordinary, " I am at your disposal to bring you, if you want the support of our Obedience ".

This letter is very similar to a cons-offensive secular activism Jean-Michel Quillardet , GODF Grand Master at the time, who had criticized Sarkozy's speeches in early January 2008 in Le Nouvel Observateur and Libération. This letter of support for Sarkozy confirms that in January 2009 that Express had revealed the end of 2010 ... and whose authenticity was challenged by its author adopts r. In April 2011, Alain Juillet, then Grand Inspector coordinator reform GLNF in 2012 became Grand Master of the GL-AMF stated that the Elysee had received no less than 13 letters of GLNF .

Less than a month later, the Grand Master Franēois Stifani issued a press release stating the position of the GLNF on secularism and spirituality ... which appears to be a support to the Head of State, an implicit criticism of the anti persuasions -Sarkozy (GODF ...) ... and most importantly, we find whole paragraphs of letter sent a few weeks earlier by Franēois Nicolas Sarkozy Stifani. 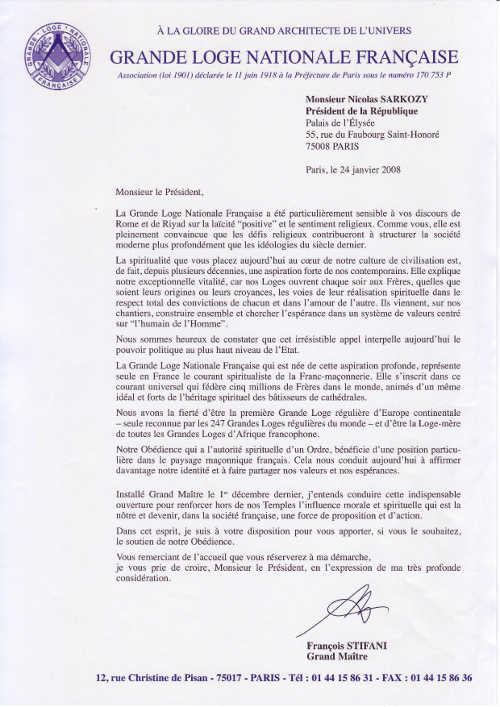