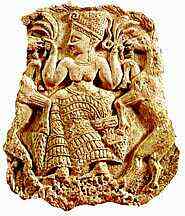 The ceremony of Masonic Baptism has always been used in the Ancient and Accepted Scottish Order, as all know who have read Des Etangs and the Actes du Supreme Conseil de France.

It has been censured as an irreverent imitation of the Christian rite of Baptism. But any Mason at all well informed cannot but know that purification by washing was used in all the mysteries thousands of years before our era. In India, Persia, Egypt, and at Eleusia, initiates were always so purified: and John the Baptist merely adopted a rite in ordinary use among the Essenes.

In every cavern of Salsette, in India, was a carved basin, to contain the consecrated water of ablution, used in initiation. In the mysteries of Mithras, in Persia, there were lavers (as it were of regeneration) in which the priest washed the neophytes, purifying them and symbolically expiating their sins. The followers of Zoroaster baptized children, as a token of the purification of the soul. Sometimes they immersed them in a great vessel of water; at other times they were washed in water brought in the bark of the palm-tree. Every Mithraic grotto or cavern was furnished with numerous basins, for lavation in the initiations; for the candidate was purified with water and fire. In the Eleusinian mysteries and those of Isis, the neophyte was purified by bathing in the sea or a river. The Etruscans of baptized with air, fire, and water. Gorius gives two pictures of ancient Etruscan baptisms. In one, a youth is held in the arms of one priest, and another pours water on his head. In the second the youth undergoes the same ceremony, kneeling on a kind of alter. Ages before Numa Pompilius, this rite was practiced in Etruria. The Druids used the same ceremony Beansobre says (Book ix. ch. vi. sec. xvi.): "The ancient Persians carried their infants to the Temple a few days after they were born, and presented them to the priest, before the sun, and before the fire, which was his symbol. Then the priest took the child and baptized it for the purification of the soul. Sometimes he plunged it into a great vase of water, and it was in the same ceremony that the father gave a name to the child. When the child had arrived at fifteen years of age, he was presented again to the priest, who confirmed him by giving him the robe called the sudra, and the girdls. These were the symbols or the sacrements of the promise that he made to the Deity to serve him according to the religion of the Persians."

The Egyptian sign Portal says, is the abridgment of the scene which represents the Egyptian baptism, or the pouring of the celestial dew on the head of the neophyte. Horus and Thoth-Lunus pour water over the head of the neophyte, which is transformed into the Divine Life (the Crux Ansata) and into purity. The legend accompanying it reads: Horus, Son of Isis, baptizes with water and fire (twice), Horus baptizes with water and fire (twice); discourse pronounced four times.


The ceremony of Baptism may be performed by any Masonic body whatever; but by whatsoever performed, even if by a Supreme Council, the body is for the time being at work as a Symbolic Lodge, and in the degree of Apprentice

A child of either sex may be baptized, by this ceremony alone, until, if a boy, he has attained the age of twelve years; or, if a girl, she has reached that of eighteen. A boy over the age of twelve years can be baptized only when received a Louveteau, or when he is to be afterward adopted; and a girl over eighteen only when afterward to be adopted.

The ceremony is particularly intended for infants. It secures to a child of either sex the protection and assistance of the Lodge or other body performing the ceremony, and to a boy the right to be received a Louventeau at the age of twelve years.

Either the father of the child must be a Mason, or its mother the daughter or grand-daughter of a Mason. In the latter case the child may be baptized, but, though a boy, cannot become a Louveteau.

The father or grandfather, as the case may be, must, if living, be a Mason in good standing; if dead, he must have been so at the time of his death. If long unaffiliated, without reasonable excuse, he ought not to be deemed in good standing.

Nevertheless, if the mother of the child is a ward or adopted child of the Lodge or other body, the good standing or affiliation of her husband or father is not important.

It needs no vote of the Lodge or other body to consent to the baptism of a child or youth. Every one that comes within the conditions is entitled to it as of right If inquiry, however is necessary to ascertain the existance of the requisite facts, a committee may be appointed for that blah, blah, blah

When a child is to be baptized, the Lodge will select one of its members to be its godfather, and the wife, sister, or daughter of a Brother of the Lodge to be its godmother...

The committee will provide white garments for the child, and, if the father and mother be unable to procure them for themselves, garments of black for the father and of white for the mother.

They will also procure, at the expense of the Lodge or other body, a small locket of gold for the child, if it be a girl under twelve years of age, or a bracelet if she be over that age; and if it be a boy, a plain gold ring. Upon whichsoever of these may be procured, will be engraved the letters [unintelligable atbash mumbo jumbo], the Samaritan initials of [more unintelligable weirdness] (masc.), and [more unintellible occult hieroglphys], Somur Adonai and Somurah Adonai; Ward of God.

Arrangement of the Hall or Lodge

The ceremony of Baptism ought, by preference, to take place in the spring of the year, when flowers and green leaves can be had.

In the East is suspended a radiant equilateral triangle, apex downward, within which is a transparency, and on this, in crimson letters, the Ineffable Name [insert unintelligable martian hieroglphys]. This is lighted during the ceremony, at the moment hereinafter indicated.

In front, to the right of the Master, is a pedestal or short square column, covered with a purple cloth, sprinkled with stars of gold. On this area vase of flowers, a silver basin of water, a silver vessel of perfumed oil, and one of salt.

The East is hung in white. Around the radiant triangle are garlands of leaves and flowers. Evergreens and garlands hang on the walls, displaying the Triangle, the Square, the Level, the Plumb, and other implements of Masonry

Over the West is a transparency, on which appears, in letters of green and gold, "Suffer Little Children To Come Unto Me; For Of Such Is The Kingdom Of Heaven."

The alter is covered with a white cloth, fringed with gold. Upon it lies the Holy Bible, open; on it the Square and Compass, and on these a passion-cros of gold. On each side of the Bible is a censer, containing perfume, and ready to be lighted.

The Officers and members are in full dress, all wearing the cordons and decorations of their highest degrees. They occupy their usual seats...

But Freemasonry isn't a Religion, right?