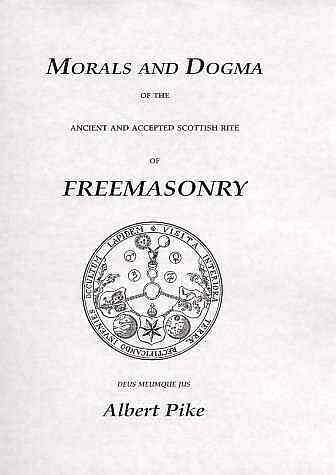 Before The Secret Doctrine and Mein Kampf; The Magnum Opus-Political Manifesto of the Occult: Morals and Dogma of the Ancient and Accepted Scottish Rite of Freemasonry, by Albert Pike 33°

MORALS AND DOGMA of the Ancient and Accepted Scottish Rite of FREEMASONRY Prepared For The Supreme Council of the Thirty-Third Degree (Mother Council of the World) for the Southern Jurisdiction of the United States and Published by its Authority HOUSE OF THE TEMPLE Washington, D.C. 1966 Entered according to Act of Congress, in the year 1871, by ALBERT PIKE New and Revised Edition; copyright 1950; published in 1966 The Supeme Council (Mother Council of the World) of the Inspectors General Knights Commanders of the House of the Temple of Solomon of the Thirty-third Degree of the Ancient and Accepted Scotish Rite of Freemasonry of the Southern Jurisdiction of the United States of America The Roberts Publishing Company; Washington, D.C.

The following work has been prepared by authority of the Supreme Council of the Thirty-third Degree, for the Southern Jurisdiction of the United States, by the Grand Commander, and is now published by its direction. It contains the Lectures of the Ancient and Accepted Scottish Rite in that jurisdiction, and is specially intended to be read and studied by the Brethren of that obedience, in connection with the Rituals of the Degrees.

Chapter XV - 15° Knight of the East or of the Sword

Chapter XVII - 17° Knight of the East and West

Chapter XXII - 22° Knight of the Royal Axe, or Prince of Libanus

Chapter XXIII - 23° Chief of the Tabernacle

Chapter XXIV - 24° Prince of the Tabernacle

Chapter XXVIII - 28° Knight of the Sun, or Prince Adept

The 'Scottish' Rite - 33 Degree's of Familiarization