Mutiny at the Vatican as Pope Francis faces dissent? 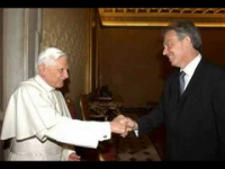 Mutiny at the Vatican as Pope Francis faces dissent

Four powerful cardinals have already gone public with their doubts about the current pope, while some have virtually accused him of heresy, writes TP O’Mahony

IN A move that is unprecedented in the modern history of the Papacy, four cardinals have publicly challenged Pope Francis. In the words of his biographer, Paul Vallely, the four “have published ‘doubts’, virtually accusing him of heresy”.

Cardinal Burke has been a persistent critic of Pope Francis, and two years ago was removed from his position as head of the Supreme Tribunal of the Apostolic Signatura (the Church’s Supreme Court) for refusing to implement changes to procedures for annulments which has been sanctioned by the Pope. A former Archbishop of Archdiocese of St Louis, he now serves as patron of the Order of Malta.

The very public expression of opposition by these four senior churchmen to the Pope has no parallel in the history of the modern Papacy, and means, in the words of Clifford Longley, editorial adviser to the English Catholic weekly The Tablet, that “Pope Francis has a mutiny of his hands”.

This situation, of its very nature, bodes ill for the pontificate of Jorge Mario Bergoglio, who was 80 in December.

All of this arises from the publication in April of Pope Francis’s document Amoris Laetita (“the Joy of Love”) which followed two Synods in Rome on the theme of “the family”.

As is customary, since the very first Synod of Bishops in 1967, the synodal discussions are followed by a papal document, which reflects to a greater or lesser extent what was said in the synod chamber.

Deciding to include or exclude what the synods may have recommended is entirely a matter for the Pope. During the long 25-year pontificate of John Paul II — when most of the Synods took place — the imperious Polish pontiff very often paid little or no heed to what was said in synod. His views prevailed.

Inevitably, of course, this greatly diminished the status of the institution, and the synods increasingly came to be regarded as mere talking shops. This trend continued during the eight-year pontificate of Benedict XVI, but Pope Francis wanted to change this.

At the opening of the first Synod on the Family in 2014 (the second Synod was held in 2015), he told the assembled bishops he wanted them to speak their minds, and not be trying to tell him what they thought he wanted to hear.

It was a refreshing departure from the expectations of his two predecessors. As part of the preparations for the session in Rome, the Vatican sent a questionnaire (unnecessarily complex, it must be said) to diocesan bishops as part of a process of engagement with the laity.

It’s not at all clear how widely this document was circulated in dioceses here and elsewhere. Predictably, the Irish Bishops — always in thrall to the bureaucrats in Rome — kept what feedback emerged here under wraps.

The German Bishops, however, released the feedback there. On matters such as sexuality, marriage and the family, some of the findings tended to confirm the view expressed by Cardinal Carlo Martini, the Archbishop of Milan (a Jesuit, like Pope Francis), shortly before his death in 2012: “The Church is 200 years out of date.”

The Cardinal’s interview was published in Corriere della Sera, one of Italy’s leading newspapers, hours after his death from Parkinson’s disease, and understandably caused a degree of consternation in the Vatican.

Long before that, Martini had supported the use of condoms in the battle against HIV, and had also questioned the Church’s line on gay relationships and divorce — calling on it to reconsider what constituted a family in the 21st century or risk losing more of its flock.

It would be unreal, of course, to expect a Synod dominated by conservative bishops (most of them appointed by the ultra-conservative John Paul II) to reflect any of this in their contributions. Most of them were committed to maintaining the status quo, and concerned that reforms would have a destabilising effect on the Church.

But in the four years between Martini’s death and the opening of the first Synod on the Family, some of the cardinals’ thinking had had some influence beyond the Archdiocese of Milan.

And in a clear signal that he saw need for reform in the Church’s approach to divorced and remarried Catholics, Pope Francis arranged for Cardinal Walter Kasper of Germany (who was known to be sympathetic to Cardinal Martini’s liberal agenda) to prepare a document for the synod fathers.

Kasper, president emeritus of the Pontifical Council for Promoting Christian Unity, published a book entitled Mercy: The Essence of the Gospel and the Key to Christian Life in 2014, and expressed support for Ireland’s referendum on same-sex marriage in May 2015, saying it was “emblematic for the situation we now find ourselves in, not only in Europe but in the whole West”.

One of the key questions the synod faced was — should divorced and remarried Catholics be admitted to the sacraments? The synod didn’t provide a single answer to this; opinion was divided, but there was a measure of support for a position that recognised mitigating factors and situations. At the end of the deliberations, it would — as is the practice — be left to the Pope himself to provide an overview.

Pope Francis, who was elected in 2013, had made mercy one of the central themes of his papacy, and how he would give practical expression to this would almost certainly set him at odds with some powerful cardinals, both inside and beyond the Roman Curia.

He knew this in advance, since there has been resistance to him from the beginning of his pontificate.

His document therefore — an apostolic exhortation — was eagerly awaited.

When it finally appeared last March, running to 189 pages, it disappointed both liberals and conservatives. While liberals praised the proclamation in that it called for the Church to be more welcoming to and less judgmental of single parents, gay people and unmarried straight couples living together — and also signalled a pastoral path for divorced and remarried Catholics to receive holy communion — they also hoped it would go further.

The Pope once again closed the door on same-sex marriage, saying it cannot be seen as the equivalent of heterosexual unions. And he did not, as some had hoped, detail health exceptions to the ban on contraception.

Conservatives, however, were less impressed. The editor of First Things, a conservative journal, called the exhortation a “muddy document”.

Much more was to follow. Some weeks after the publication of Francis’s document, a letter was sent by 45 theologians and clergymen to the 218 cardinals and patriarchs of the Catholic Church, asking them to request clarification from the Pope about certain sections of the document, which, they said, had “putative heretical implications”.

In November, the four cardinals submitted a series of questions to the Pope, questions which demanded yes or no answers. Such a challenge, as Christopher Lamb, the Vatican correspondent of The Tablet emphasised, would have been unheard of during John Paul II or Benedict XVI’s papacies.

The Pope said critics of his document fail to see how the Holy Spirit has been working since Vatican II, arguing that they see “either white or black, even if it is in the flow of life that one must discern”.

In his exhortation, the Pope had said he was “in agreement with the many synod fathers who observed that the baptised who are divorced and civilly remarried need to be more fully integrated into Christian communities”.

And he went on to stress the need to “avoid a cold bureaucratic morality in dealing with more sensitive issues”. What was required instead was “a pastoral discernment filled with merciful love, which is ever ready to understand, forgive, accompany, hope, and above all integrate”.

The controversy over Amoris Laetitia rumbles on, and is a clear sign of the tug-of-war going on behind the scenes over the Church’s future. Will it be a Church based on mercy, forgiveness, personal discernment and dialogue or a rules-based Church?

The Pope used his annual Christmas meeting with the members of the Roman Curia to warn against opposition to his position.

He referred to cases of “malicious resistance” which “spring up in misguided minds and come to the fore when the devil inspires ill intentions, often cloaked in sheep’s clothing”.

His problem now, though, is that the genie of opposition at the highest level is now out of the bottle. Where will it end?