On Fasting, by A Hassid and A Heretic 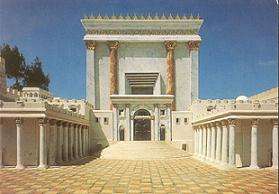 Today is one of these days, days that I wonder why I bother with the charade at all.

Once upon a time there was a city (most probably a village, or town, by modern standards) in a continent far away, a walled city that had the misfortune of being in the way of the Romans and their legions. Jerusalem succumbed to the foe, and the series of events from the day the outer city walls were breached, the 3 weeks of fighting that ensued to the complete destruction of the temple some 2000 years ago on the 9th day in Av is commemorated the by mourning in these three weeks starting with a minor fast day and ending with a major fast day.

The Lord may work in mysterious ways but His people are way more predictable. Ever since that set of fateful events the commemorations were held faithfully, and true to rabbinic form it became ever more restrictive. A whole set of laws now exist to make sure that the destruction is not forgotten. In a way it worked, the Land of Israel was never forgotten and the astonishing return and establishment of a Jewish country there can only be attributed to the laws that govern the mourning. Only, we still abide by that rules, and aren’t too happy with the State of Israel (to say the least). Go figure.

Napoleon was right, if the story ever happened, and even if it never happened the moral of story sure did occur. As the story goes, Bonaparte once walked the streets of (enter the name of the city here) and saw Jews sitting on the floor and crying. Upon hearing that their temple was destroyed he got visibly agitated – it didn’t fit in with his emancipation theory. The rabbis then assured him that this actually happened 2000 years ago, in Jerusalem, by the Romans. Napoleon was moved “A people that could still mourn over their temple after so many years of exile will eventually find their way back home” he exclaimed.

Napoleonic stories, as are Franz Joseph anecdotes are quite the favorite amongst Chasidim. It always ends with a quick witted response of a clever rabbi or the emperors’ acknowledgment of the superiority of the Jews. The Baa’l Ha’Tanye worked as a spy for the Russians and snuck into the French camp when the emperor found him he put his hand on his chest to see if his heart is pounding. Nothing. Rabbi S Zalman was a master over his heart. I bet the French don’t know to this day that they were defeated due to the heroics of the said rabbi. And then there’s this truism: Napoleon once found Observant Jews mumbling outside the shul ostensibly talking to the moon, upon inquiry the rabbi explained that once upon a time the sun and the moon were the same size and the moon told god that ‘two kings can’t share one crown’ upon which the almighty punished the moon to become a trillionth the size. Highly impressed Napoleon then and there decided that he wants to convert “A people that have no other trouble than praying to God about the size of the moon sure must be a happy people”. No one knows who talked him out of it.

And there I am. It is almost the end of the day, the end of the workday. I’m salivating on the thought of eating the coffee roll while sipping the coffee. So why am I complaining? My poor co-workers are going to fast until the better part of the evening. Until the stars show at night they will be roaming all over the place with dried mouths and splitting headaches.

Maybe I am complaining because they seem to have a purpose in that, while I don’t.

Posted by Shtreimel at 6:58 PM

Can you imagine the great rabbi with his patriarchal beard and glaring eyes who had a poor command of the Russian language let alone French being a spy? Of course not. Legend has it the spy was Moshe Meisels of Vienna, and as with all Chabad legends, this one is probably well documented too.

It is true, however, poor Napoleon never discovered that it was the Ropshitzer Rov who shoved matzos in oven on Pesach eve and thereby scorching one French battalion after another. But we shouldn’t get over sympathetic here. After all, Reb Chaim Volozhiner advised the general to withdraw his troops from the east, because his conglomerate army wouldn’t stand against a unified Tsarist army. But he wouldn’t listen to the gedolim.

So did you fast?

It wasnt the Bal Ha Tanya. It was one of his chasidim who knnew a few languages very well and was very well educated otherwise. He became an interpreter for the french army between them and the Polish or Russian and thats why he had the in with them..

"The Lord may work in mysterious ways but His people are way more predictable."