Freemasonry and the U.S. One Dollar Bill, Great Seal and Flag

The One Dollar Note

The Great Seal of the United States can be easily viewed on the back of a one-dollar bill. Although the colors mentioned in this article won't be visible, it is still an easily obtained reference point for your convenience. The OBVERSE is on the right side (the eagle), while the REVERSE is on the left side (the pyramid) of the instrument.

Man is an enigmatic creature having a dual nature, temporal and spiritual. His institutions reflect the multiple facets of his complex and varied mental processes. He is at once occupied with the routine of satisfying the basic human needs for food, clothing, and shelter and the less tangible and more varied spiritual and social needs. His viewpoints are as varied as the individuals, subject not only to the external changes of environment but to self- created internal changes. Man alone has within himself any considerable power of thought or imagination. One facet of man's behavior to come out of his imagination, superstition, spiritual groping, and reasoning is symbolism.

Signs, pictures, objects, emblems, words, numerals, music, or any means of conveying ideas from one individual to another become the vehicle of symbolism or symbols. Certain of man's activities lend themselves more readily to symbolism than others. The ritual of Freemasonry is especially rich in symbols - familiar things that convey a hidden meaning to the initiated. Philosophic Masonry is the heir to the symbolism practiced in the ancient mysteries, the Hebrew Cabal, and medieval Rosicrucian societies.

In this present age, where material things engross almost every waking hour, symbolism has lost much of its fascination, but this was not so in the eighteenth century when the [American] revolutionary heroes pledged their lives, their fortunes, and their sacred honor to the erection of the new nation. As the crisis moved toward its climax the ideals for which they fought began to assume symbolic form. Late in the afternoon of July 4, 1776, the Continental Congress "resolved, that Dr. Franklin, Mr. J. Adams and Mr. Jefferson be a committee to prepare a device for a Seal of the United States of America." On August 20 the committee reported its design to Congress; but the report was tabled, and for three years and a half no further action was taken. On March 25, 1780, the report of the first committee was referred to a new committee consisting of James Lovell, John Morin Scott, and William Churchill Houston. This committee received artistic assistance from Francis Hopkinson. A new design was reported on May 10 (or 11), 1780, but debate was followed by recommital to the committee with no further progress for two more years. In the spring of 1782, a third committee, composed of Arthur Middleton, John Rutledge, and Elias Boudinot with the assistance of William Barton, A.M., reported a third design for a seal to congress which was also found not satisfactory. On June 13, 1782, Congress referred all of the committee reports to Charles Thomason, Secretary of Congress. Thomason prepared a design from these reports and submitted it to Barton who suggested a few changes on June 19, 1782. Thomason immediately wrote his report to Congress and submitted it on June 20, 1782; the report was accepted the same day and thus the design of the great seal was fixed. It is described as follows:

ARMS: Paleways of thirteen pieces, argent and gules; a chief, azure; the escutcheon on the breast of the American eagle displayed proper, holding in his dexter talon an olive branch, and in his sinister a bundle of thirteen arrows, all proper, and in his beak a scroll, inscribed with the motto, "E PLURIBUS UNUM." For the CREST: Over the head of the eagle, which appears above the escutcheon, a glory, or, breaking through a cloud, proper, and surrounding thirteen stars, forming a constellation, argent, on an azure field. REVERSE: A pyramid unfinished. In the zenith, an eye in a triangle, surrounded with a glory proper. Over the eye these words, "ANNUIT COEPTIS." On the base of the pyramid the numerical letters MDCCLXXVI. And underneath the following motto, "NOVUS ORDO SECLORUM."

Among those who helped design the Great Seal of the United States the following are known to have been Masons: Benjamin Franklin, Thomas Jefferson, William Churchill Houston, and William Barton. Whether they drew heavily upon Freemasonry in this work it is impossible to assert but when an informed Mason examines the Great Seal here is what he sees: 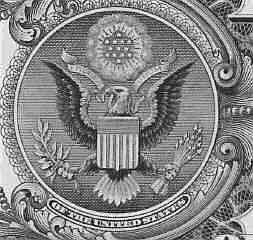 On the obverse is an eagle whose dexter wing has thirty- two feathers, the number of ordinary degrees in Scottish Rite Freemasonry. The sinister wing has thirty-three feathers, the additional feather corresponding to the Thirty-Third Degree of the same Rite conferred for outstanding Masonic service. The tail feathers number nine, the number of degrees in the Chapter, Council, and Commandery of the York Rite of Freemasonry. Scottish Rite Masonry had its origin in France; the York Rite is sometimes called the American Rite; the eagle thus clothed represents the union of French and American Masons in the struggle for Liberty, Equality, and Fraternity. The total number of feathers in the two wings is sixty-five which, by gematria, is the value of the Hebrew phrase YAM YAWCHOD (together in unity). This phrase appears in Psalm 133 as follows: "Behold, how good and how pleasant it is for brethren to dwell together in unity," and is used in the ritual of the first degree of Freemasonry. The glory above the eagle's head is divided into twenty-four equal parts and reminds the observer of the Mason's gauge which is also divided into twenty-four equal parts and is emblematic of the service he is obligated to perform. The five pointed stars remind him of the Masonic Blazing Star and the five points of fellowship. The arrangement of the stars in the constellation to form overlapping equilateral triangles and the Star of David calls to the Mason's mind King David's dream of building a Temple, to his God, the Companions who rebuilt a desecrated Temple, and the finding of the Word that was lost. The gold, silver, and azure colors represent the sun, moon, and Worshipful Master, the first that rules the day, the second, the night, and the third, the lodge. While silver, connected with the letter Gimel or G and being surrounded on an azure ground by a golden glory, reminds the Mason of the letter G, a most conspicuous furnishing of a proper lodge room. The shield on the eagle's breast affirms by its colors, valor (red), purity (white), and justice (blue), and reminds the Mason of the cardinal virtues. The value of these colors, by gematria, is 103, the value of the phrase EHBEN HA-ADAM (the stone of Adam) and suggests the perfect ashlar, or squared stone, of Freemasonry. One hundred and three is also the value of the noun BONAIM, a Rabbinical word signifying "builders, Masons." Thus the national colors spell out, by gematria, the name of the fraternity. The scroll in the eagle's beak, bearing the words E PLURIBUS UNUM (of many one) reminds him also of the unity which has made brothers of many. 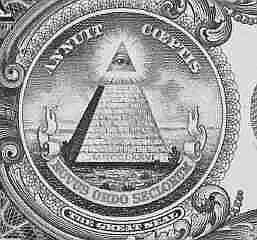 On the reverse, is the All Seeing Eye within a triangle surrounded by a golden glory. Besides the obvious Masonic significance of this design, it has a cabalistic value of seventy plus three plus two hundred, equaling two hundred and seventy-three which is the value of the phrase EHBEN MOSU HABONIM (the stone which the builders refused) familiar to all Royal Arch Masons. It is also the value of the Hebrew proper noun HIRAM ABIFF, the architect of Solomon's Temple and the principal character of the legend used in the Master Mason degree. The triangle is isosceles, formed by two right triangles having sides of five, twelve, and thirteen units in length, illustrating the 47th Problem of Euclid. The triangle also represents the capstone of the unfinished pyramid and reminds the Mason of the immortality of the soul and that in eternity he will complete the capstone of his earthly labors according to the designs on the trestle-board of the Supreme Architect of the Universe. The unfinished pyramid cannot fail to remind him of the unfinished condition of the Temple when tragedy struck down its Master architect.

The blaze of glory found on either side of the Great Seal cannot fail to remind the Mason of the Great Light in Masonry which is the rule and guide to faith and practice and without which no Masonic lodge can exist. It reminds him that only more light can dispel the pall of ignorance in which he stumbles until he enters the Celestial Lodge where all light is given. 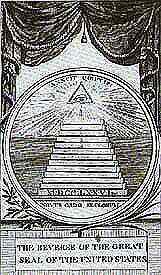 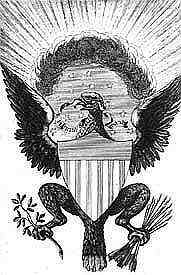 The first Great Seal designs always clearly illustrated the eagle as a Phoenix.

In fact all Phoenix's are drawn as slightly modified eagles.

In the Occult the Phoenix in it's single or double headed versions is sometimes used as a reference to Satan. 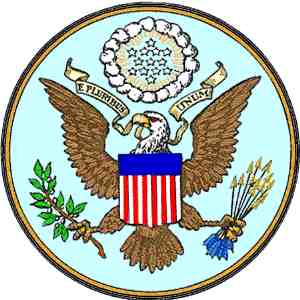