By Sylvia Hui, The Associated Press 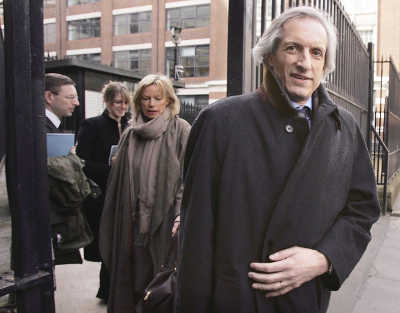 Writer Michael Baigent, who gained attention for launching a lawsuit contending that The Da Vinci Code stole ideas from his own book, has died of a brain hemorrhage at age 65, his literary agent said Monday.

Baigent is best known for writing the 1982 non-fiction book The Holy Blood and the Holy Grail, which explores theories that Jesus married Mary Magdalene, the couple had a child and the bloodline survives. In 2006 Baigent and co-author Richard Leigh made international headlines when they sued Dan Brown’s publisher for copyright infringement, claiming Brown “appropriated the architecture” of their book in a high-profile London court case they eventually lost.

Baigent’s family said the author, who was from New Zealand, died on Jun. 17 in Brighton in southern England.

The 2006 copyright case saw Brown flying to London to be cross-examined by lawyers. While acknowledging that he read Holy Blood during research for Da Vinci, Brown said he also used many other resources, and Baigent and Leigh’s work was not crucial to the novel.

Though Baigent lost the case, it boosted publicity for his work and sales of Holy Blood — his first book — jumped as a result.

The author wrote about a dozen other nonfiction books and a novel, specializing in topics including secret sects and historical mysteries. The Messianic Legacy was a sequel to Holy Blood; The Temple and The Lodge explored the origins of Freemasonry. He also wrote about the Inquisition, ancient astrology and the Dead Sea Scrolls.

Michael Feran Baigent was born in Nelson, New Zealand, in 1948. After graduating with a degree in psychology he worked as a photographer and a magazine editor in Australia, New Zealand and Spain, before taking up research for a documentary called The Shadow of the Templars.

From 1998 he lectured on and led tours of the temples and tombs in Egypt, and from 2001 he was editor of the magazine Freemasonry Today.

He is survived by his wife, Jane, their two daughters, a stepdaughter and a stepson.

U.K. Freemasonry in the News, have the 'Brethren' finally met their Waterloo?