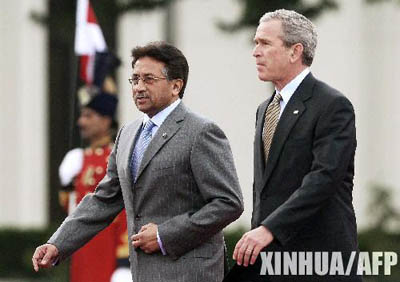 By Khalid Qayum and James Rupert

Police complied with Gillani's decree, removing barricades around the home of the deposed chief justice, Iftikhar Muhammad Chaudhry, and allowing him out to address a crowd of journalists and anti-Musharraf politicians and lawyers who had gathered on his lawn.

The National Assembly today elected Gillani, 53, head of a government that vows to slash the power of Musharraf, whose loss of authority was immediate.

The collapse of Musharraf's arrest order against Chaudhry, a political foe, ``shows that Musharraf's authority has now evaporated,'' said Talat Masood, a retired general and independent political analyst in Islamabad, the capital.

Musharraf is scheduled to swear Gillani into office at 11 a.m. tomorrow, formally restoring the elected civilian rule that Musharraf overthrew in a 1999 army coup. Musharraf ``has no option'' but to accept his loss of power, ``because the army will not back him if he takes any impulsive step,'' such as trying to dissolve the parliament, Masood said.

After eight years of rule as army chief, Musharraf surrendered that post in November.

``Already, the government bureaucracy is bending 180 degrees'' to acknowledge Gillani, rather than Musharraf, as the country's leader, Masood said.