The Abduction and Murder of Captain William Morgan 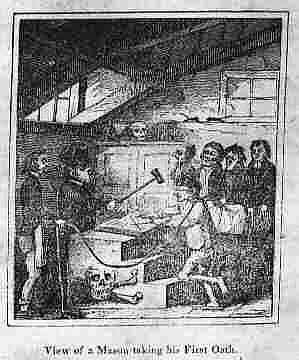 The Abduction and Murder of Captain William Morgan

In March 1826 Morgan formed a partnership with David C. Miller, John Davids, and Russel Dyer. Miller, who had taken only the first Masonic Degree (Morgan was Royal Arch), was a printer and publisher of the Batavia Republican Advocate. Like Morgan Miller sought profit, but in addition he was infuriated by the establishment of a rival local newspaper, the Peoples Press, whose editors were Masons. David and Dyer were to furnish capital for the publication.

News of this enterprise spread quickly among Masons of the towns and villages throughout the Burned-over District- Rochester, Buffalo, Lockport, Canadaiga, LeRoy, and Lewiston. These Masons not realizing that published exposes were commonplace in England and France were available in the United States, and knowingly only that to write and publish such secrets was a heinous offense in light of Masonic tradition, determined to prevent the books publication. Morgan and his partners received various threats and were constantly harassed, but the book appeared nevertheless.

On August 4 Morgan's partners drew up a bond for $500,000, which the author was to receive in exchange for his manuscript. The bond evidently was worthless, for two days later he wrote his partners and charged them with evasion and dishonesty. Amid rumors, puported violence, and intrigue, Morgans book received a copyright on August 14 under the title Illustrations of Masonry, By One Of The Fraternity Who Has Devoted Thirty Years to the Subject. It was detailed and, by all accounts, accurate narrative of three Blue Lodge degrees as then conferred in New York, giving all the secret signs, passwords, obligations, and grips, and was replete with woodcut illustrations. When Miller advertised the book for sale at one dollar a copy in the Republican Advocate on December 14 (after Morgans abduction), its content included an introduction by the printer that denounced Masonry in scathing terms.

In mid-September 1826 local Masons began to take direct action against Morgan, hoping to stop the books appearance. On September 10, an unsuccessful attempt was made to destroy Miller's print shop by fire. Prominent Masons in Batavia later offered a reward of $100 if it could be proved that any of the bretheren were responsible. That same day, Nicholas Cheseboro, master (head) of Ontario Master's Lodge at Canandaiga, obtained a warrant for Morgan's arrest on a charge of theft, claiming that he had stolen a shirt and cravat from a local tavern keeper, from whom he had rented a room in May 1826. The following day, a constable (who was not a Mason) and five others who were lodge brothers journeyed to Batavia, arrested Morgan, and took him to Danold's Tavern. Morgan was then taken to Canandaiga on the theft charge, but the magistrate released him because of lack of evidence. He was rearrested immediately on the claim of $2.69 due an innkeeper. Morgan admitted the debt, and the authorities incarcerated him about 10:00 P.M.

The next evening, September 12, 1826, the Canandaiga jailer was absent. Cheseboro, with two Masonic assistants, afer some difficulty persuaded the jailers wife to release Morgan upon payment of the debt. Morgan was then escorted from the jail. About 9:00 P.M. a shrill whistle sounded, and the jailers wife rushed to the window, only to see Morgan struggling with two men and shouting "Murder!" A yellow carriage appeared, and four men threw Morgan into it. The carriage went "clattering" into the night, and Morgan was never seen in public again.

Morgan's exact fate has remained a mystery since that dark evening, for his corpse was never found. From the mass of confusing and contradictory testimony, some obtained in court, some given many years later in deathbed "confessions", it appears that the approximately sixty-nine Masons involved in Morgan's abduction had made an arrangement with Masonic brethren in Canada by which Morgan was to receive a sum of money (perhaps $500) and a farm on which he would live out his days incognito. The plan collapsed, however, and no satisfactory documented explanation was ever offered by those involved. Morgan was apparently held a prisoner in the French powder magazine at abandoned Fort Niagara. On September 19, 1827, he was allegedly bound with weights and thrown into the Niagara River (below the falls), near the place where the river sluggishly flows into Lake Ontario. Of course, this account is conjecture, for authorities never located Morgan's body, and although his abduction was ultimately proved in court, his murder was not. For years it was rumoured that Morgan had been seen in Canada and in more exotic places-in Smyrna in the Ottoman Empire and in British Honduras. It was also reported that Morgan had become an Indian Chief and that he had "turned pirate" and had been hanged in Cuba for his crimes.

This writer agrees with New York's third special counsel of 1831, Victory Birdseye, that Morgan was probably murdered by misguided Masons, who , when the Canadian deal fell apart, panicked and decided that by getting rid of the author, they would somehow prevent publication of The Illustrations. To their chagrin, not only did the book appear, duly advertised, in mid-December, but within a year, Morgan's abduction and alleged murder had produced a violent moral crusade against Masonry and an incipient political party as well.

The Antimasonic Party in the United States 1826-1843
William Preston Vaughn
The University Press of Kentucky 1983.