MEXICO and the Masons 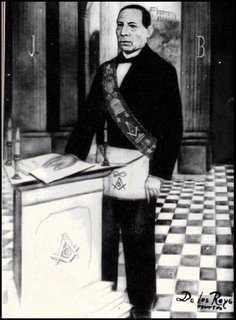 MEXICO and the Masons

Dick Hancick writes: When I was training Peace Corps volunteers (PCV) in Mexico during the 1960s, I found to my surprise that many of the presidentes municipales (town mayors) were Masons as well as members of the official party, the PRI. In fact, in arranging village experiences for the PCVs, I found that, in working with the presidentes, I could not work with the village priests. The University of Oklahoma had a center for almost 20 years, Hacienda El C bano, which was located in a small village in Colima. Our cook was a bright attractive young woman who had quite a sense of humor. On one occasion when the church bell was ringing calling people to mass, I spotted her walking away from the church. When I kidded her about not wanting to attend mass, she Said, ” Dr., didn’t you know that we are all Communists, Masons and Protestants?” This was a joke and I took it as such; nevertheless, I think that it may have represented a position—anti-Masonic, Communist and Protestant—that was probably then being conveyed to members of the village church.

RH: Presumably, many members of the PRI are Masons, while there are none in the PAN of President Vicente Fox.

Gustavo del Angel thought that the Masons were losing their political power in Mexico and in Latin America generally. Paul Rich, an expert in these matters who spends each academic year in Mexico, questions this:

"Secret societies -- the Orange Order in Northern Ireland, the Broderbund in South Africa, the Ku Klux Klan in the Old South, the Scottish Rite Freemasons in Mexico, the Tongs in Macau and Hong Kong, the Opus Dei in Spain, the Grand Orient in France -- derive much of their influence from the power that people think that they have. Hence, they are like a gun that may not be loaded but which, unless people know for sure that it is empty, functions just as well in exerting control as the loaded one. The Custodians of Care at Bohemian Grove [near San Francisco] are a case in point. Supposedly most of them are recruited to form the Cavemen, but nobody is sure. Skull and Bones at Yale is the subject of an entertaining new movie. The AD and Porcellian at Harvard always gets credit for supposed powers. "

"I am also interested in what Paul Rich thinks of this, given his expertise. My primary focus is different, but I have often run across Masonic connections when investigating revolutionary movements from Mexico south. For example, in the earlier part of the century, 1918-28 or so, Nicaraguan rebel General Augusto Cesar Sandino was a Mason and received a great deal of support from lodges in the Veracruz region before his final return to Mexico. Among his reportedly Masonic supporters was Lazaro Cardenas, the father of Cuauhtemoc and then army commander in the Veracruz region. The Sandinista Front, the FSLN, was, of course, named after Sandino. Later, during the 1960s and 1970s, the third [not first as most believe] head of that Front, Carlos Fonseca Amador, was often protected by Masonic lodges during his clandestine travels, especially in southern Mexico. But then, the arch rival of both Sandino and the FSLN, Anastacio Somoza Garcia was also a Mason. So, go figure."

My comment: As an outsider and a non-expert, I can only comment that all service clubs (Lions, Elks, etc.) are losing membership. so I suspect that this phenomenon has hit the Masons too.