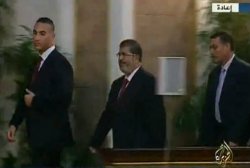 President Mohammed Morsi, twice jailed by Mubarak before he himself was overthrown on February 11, 2011, is the "elected president, people should rally around him", he told his lawyer, Farid El Deeb.

Mubarak, 84, had been sentenced to life in prison for his role in the deaths of protesters during the 18-day uprising in 2011 that ended his three decade reign.

But a court overthrew that verdict and ordered a new trial which is set to start on April 13.

Mubarak also spoke out against violent protests, although he believed Egyptians have the right to peaceful demonstrations, Mr El Deeb said.

Roughly 850 people were killed in the uprising.