Sister Angelica - The nun who became a mogul

The nun who became a mogul 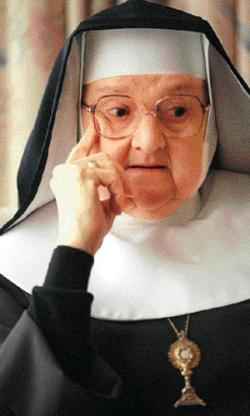 Mother Angelica is the only woman to launch a television station.


Raymond Arroyo's authorized biography of Mother Angelica made The New York Times bestseller list in the first week of its publication. Remarkable for any book, but particularly so for a study of an American Roman Catholic nun. And one whose name probably means very little to most people reading this column.

But this 82-year-old, now in terrible health, happens to be the only woman to have founded a television station, and an extraordinarily successful television station at that. Launched in 1981, Eternal World Television Network (EWTN) is the largest religious media empire in the world and is watched by 118-million people in more than 30 countries.

At heart it is fairly standard stuff. Current affairs shows with a Catholic perspective, documentaries about saints and Christian heroes, the Rosary and Mass, call-in shows and interviews with converts, scholars, writers and priests. Orthodox and faithful Roman Catholicism broadcast from a studio complex in Alabama. The extraordinary, however, within the ordinary is that EWTN came along when the Catholic Church was still being cruelly spun around by the liberalism that slid its way into the religion after Vatican II.

The Second Vatican Council in the early 1960s intended to open one or two windows. Modernist radicals were more interested in smashing stained glass. Genuinely Catholic bishops, priests, teachers and activists found themselves marginalized and in some cases persecuted.

Then the great change -- Pope John Paul the Great. The faithful were empowered and a new wave of organizations, publishers, periodicals and colleges began to flourish. EWTN was part of the exquisite counter-reformation.

Mother Angelica herself is an unlikely hero. Born Rita Rizzo, she grew up in an Ohio slum dominated by organized crime where prostitutes and thugs walked the streets. Her mother suffered from acute and sometimes suicidal depression, her father abandoned the family and left them in poverty.

She became a cloistered nun and expected to spend the rest of her life as such. But she saw at first-hand the contrived decay of the Catholic Church and felt obliged to intervene. As is so often the case with people who have been mugged by the reality of the inner city, she has never suffered liberals lightly and was not about to blithely accept establishment driven rusty relativism.

As Arroyo points out so eloquently in his book, Mother Angelica with a cause is a sight to behold. Muscular Christianity at its most compelling. Not only did she have to fight the television hierarchy but often various bishops who were so desperate to not rock the boat that they preferred to sink.

The book itself is a fitting tribute to a woman whose final legacy, though great even now, is still to be felt in its entirety. For once hyperbole is justified: She changed and is changing the world.

Changed and changing Canada too. EWTN has a dedicated following in this country and is growing steadily. For many years, however, those Canadians who chose to watch the station were obliged to break the law. Or sort of break the law. They had to buy satellites on the grey market and pretend that they wouldn't dream of betraying the CBC.

Because the Canadian response to EWTN was, well, nun is too many. While welcoming Playboy TV and various semi-pornographic networks into this country, the Canadian Radio-television and Telecommunications Commission(CRTC) ruled that Canada was too vulnerable, too fragile and too atheistic to need or want Mother Angelica.

Eventually the CRTC changed its mind, but with the advent of digital cable and the expanded television market the government body had little option. The market dictated that the state become less intolerant.

It was yet another example of the galloping paradox that permeates Canadian society. This is a deeply religious country but those who make and shape its politics and culture not only refuse to acknowledge this but, in many cases, genuinely have no idea that it is true.

It's the same secular fundamentalist approach that attempts to expunge faith-based opinion from the public square, unless of course the particular opinion is politically accommodating. When the Roman Catholic Church, for example, expresses profound reservations about Third World debt and the war in Iraq, it is welcomed as a pure voice of moderation and balance.

However, when it condemns abortion, refuses to accept same-sex marriage and rejects euthanasia it is told by the same people to keep quiet because of the necessity to separate church and state.

Mother Angelica has never desired to break any separation between church and state. Like most orthodox Christians, be they Catholic or Protestant, she simply wants the same rights and abilities as the non-religious world to express her views.

Author Raymond Arroyo makes clear what some of us have experienced at first hand. That the last acceptable prejudice in allegedly polite North American society is bigotry toward Christians -- unless they are Christians who have jettisoned Christ. Mother Angelica overcame that hostility. Rather, she told it in no uncertain terms to go to hell.

She and others have changed the nature and the subject of the debate. Secularists don't like that at all, which is why they are currently so vehemently angry and prefer to dismiss the arguer rather than oppose the argument.

They should watch EWTN. They might learn something, and it's now available in good old liberal Canada.