I've cracked the code: it's rubbish

I've cracked the code: it's rubbish

It's the book they're all talking about on the beach this summer. . . more fool them, says a disappointed Christopher Howse

All along the Mediterranean littoral, tourists awake to find their torsos marked with pale oblong patches, 178mm by 196mm. This is the mark of Da Vinci. It's what happens when you fall asleep in the sun with a copy of The Da Vinci Code carelessly open on your body. 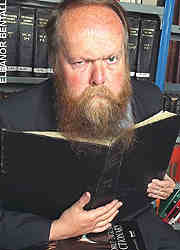 Dan Brown's novel has sold six million copies, and its 605 pages seem just the thing to shove in the hand-luggage for a holiday read. But, goodness, it has annoyed people. Presses turn day and night printing books rebutting every error in Brown's fat farrago: The Da Vinci Hoax; Da Vinci Code Decoded; Cracking the Da Vinci Code. Somehow, they add up to more copies than the original.

The reason for the anger is that the novel says rude things about Jesus and the Church. In that respect, it's a sort of Satanic Verses, only even worse written. "Everyone in the reception area gaped in wonderment at the half-naked albino offering forth a bleeding clergyman," is an example of the stylistic register.

Yes, it's rude about albinos, too. The baddy is an albino. This is to make him creepy. Just as Blind Pew, tap-tapping along in Treasure Island is creepy, or Quilp in Little Dorrit is creepy because he's a hunchback, so is the assassin Silas, because he is albino. Albinos are not amused.

Silas the albino is supposed to be an Opus Dei "monk" in the novel. Not that members of Opus Dei are monks. But what's the point in pointing out all the errors? It's like Boots loyalty cards: life is too short. I mean, Brown has Pope Clement V burning Templars whose ashes are "tossed unceremoniously in the Tiber River"; but Clement lived in Avignon and never went to Rome. Who cares?

Never mind little facts when the big plot's so absurd. Jesus was married to Mary Magdalen, and the proof of that is that Leonardo Da Vinci shows her leaning against him in The Last Supper. You thought that was St John? Think again.

You see, the Church has kept the Magdalen marriage secret because she had a baby by Jesus, and this secret was passed on by the Templars and the "Priory of Sion". And that's proved by the Rosslyn Chapel in Scotland and the Temple Church in London. And Isaac Newton knew the secret, and so did Victor Hugo. And the Roman Catholic Church will do anything to make sure people don't find out the secrets of the Gnostic Gospels; so albinos will kill you if you buy a copy of The Da Vinci Code at the airport.

Not so much a plot as a conspiracy. And haven't we heard it before? What about The Holy Blood and the Holy Grail, written by Michael Baigent, Richard Leigh and Henry Lincoln in 1982? That featured the marriage of Jesus and Mary Magdalen, and the Templars, and the Priory of Sion in the French town of Annemasse, sworn to the return to power of the Merovingians (descendants of Mary Mag). Oh, and a sprig of Rosicrucianism for the pot.

At one level, one doesn't know whether to weep with laughter or with frustration that people can be taken in. It is all of a piece with a sort of Daily Mail headline: "Is this code the secret to the Bible?" (or the Pyramids, or Flying Saucers, according to the week). A desire to believe it is the same appetite that goes for Madonna's red-string Kabbalah. 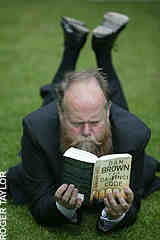 The pedigree of The Da Vinci Code is clear. It derives from a shivery kind of Gothic novel of which the archetype is Ambrosio, or The Monk, published in 1796 by Matthew "Monk" Lewis, of whom Byron wrote:

Wonder-working Lewis, Monk or Bard
Who fain wouldst make Parnassus a churchyard;
Even Satan's self with thee might dread to dwell,
And in thy skull discern a deeper hell.

That novel had a nun immured by a sadistic Mother Superior, clutching to her bosom a long-dead baby, plus hooded figures, rotting corpses and the depraved Ambrosio, Abbot of the Capuchins of Madrid (never mind that Capuchins don't have abbots, this is fiction). In Lewis's day, "monkish" was a synonym for wickedly ignorant; respectable churchgoers were convinced the Pope was Antichrist.

Translate the genre to modern times and anyone can spin a conspiracy tale based on the premise that what you see in the Catholic Church is not what you get. Let's think. Did you know that Pope John Paul on the feast of St Lucy knotted, by moonlight, the rope that was to hang Roberto Calvi beneath Blackfriars Bridge? The Blackfriars were in it up to here with the Mafia and the Banco Ambrosiano and Russian gold. It all fits.

It's only a novel, for heaven's sake. Didn't Mozart put a lot of Masonic fal-de-lal in The Magic Flute? And in Dracula, Van Helsing suddenly produces the Host - "I brought it from Amsterdam. I have an Indulgence" - and scatters the sacred elements around Lucy Westenra's tomb. This is unpleasant to a Catholic sensibility, and necessitates the hard work of unravelling the misunderstanding of what an "Indulgence" is.

The immunity of fiction to factual correction is undermined by two things about Brown's book. One is that readers believe some of the novelistic assertions of the narrative's truth. The other is the surprising ease of selling as the basis for a story the judgment that the Catholic Church is a monster of deception. Will it come within the terms of David Blunkett's law against incitement to religious hatred?

The most obvious fantasy in the novel is making Opus Dei a kind of training school for assassins. In truth, the Pope declared the founder of Opus Dei a saint, at a crowded ceremony in St Peter's Square in 2002, the year before The Da Vinci Code came out. If the Pope is Antichrist, of course, that is the sort of thing you might expect.

But, in reality, the men and women in Opus Dei are friendly and do good works. I was a member of the English branch in the 1980s and you couldn't find nicer people - seldom a cross word, let alone firearms. They wouldn't be unkind to albinos.

One small detail undermines any remaining confidence in Dan Brown's scholarship. I was reminded of it by Craig Brown's exposure of Gore Vidal. "Disillusion first set in," Craig wrote, "when I heard him on the BBC speaking with apparent authority about the British secret services. It was only when he began talking about 'M-Fifteen' and 'M-Sixteen' that I realised that, far from knowing all about MI5 and MI6, Gore Vidal didn't even know how to pronounce them."

In just this way, Dan Brown has all his art experts talking about "Da Vinci" as if it were an ordinary surname like Brown. Real art historians call him Leonardo.