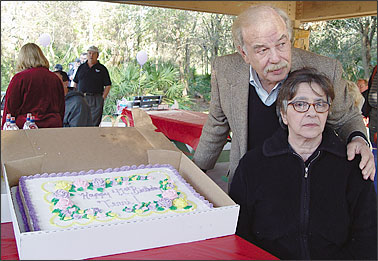 Conservatives step up attack on judiciary

WASHINGTON - Christian conservatives, led by some top Republicans, are stepping up their assault on the U.S. judiciary in response to the Terri Schiavo case, saying judges are attacking religion and must be reined in.

At a conference Thursday and Friday organized by the Judeo-Christian Council for Constitutional Restoration, an umbrella group bringing together many religious conservative organizations, prominent Republicans joined with activists to assault what they term “judicial activism.”

House of Representatives Majority Leader Tom DeLay, under fire for his use of campaign dollars and other ethical problems, addressed the conference in a videotaped message Thursday in which he denounced a “judiciary run amok.”

“Our next step, whatever it is, must be more than rhetoric,” the Texas Republican told the conference, entitled “Confronting the Judicial War on Faith.”

Conservatives including DeLay have intensified their criticism of judges in the aftermath of the Schiavo case. Several at the conference said the Florida woman who died last week, 13 days after her feeding tube was removed, was a victim of “judicial murder.”

“I believe the judicial branch of our government has overstepped its authority on countless occasions, overturning and, in some cases, ignoring the legitimate will of the people,” said DeLay, who was unable to attend the conference because he was in Rome for Pope John Paul II’s funeral.

Republicans rushed a bill through Congress to allow federal courts to intervene in the Schiavo case. But a federal district judge, an appeals court and the Supreme Court declined to do so, deferring to Florida courts which had repeatedly ruled that Schiavo, who spent 15 years in a persistent vegetative state, should be allowed to die.

American University historian Allan Lichtman said there was nothing new about politicians attacking the judiciary but the attacks now were more intense than at any time since the desegregation era of the 1950s.

“The Schiavo case has made passions boil over. Republicans like DeLay thought the courts would bend to their will but the courts slapped them in the face,” he said.

President Bush has frequently criticized “activist judges” he accuses of “legislating from the bench.” Under the Constitution, powers and responsibilities are divided among the legislative, executive and judicial branches, each of which acts to balance the actions of the others.

Even before the Schiavo case, conservatives were enraged by judicial decisions in Massachusetts and elsewhere allowing same-sex marriages, banning public displays of the Ten Commandments and outlawing the death penalty for crimes committed by juveniles.

Democrats have also criticized the judiciary over the years. Many were extremely bitter at the way the Supreme Court declared Bush the winner of the 2000 presidential election.

DeLay said courts had invented new constitutional “rights,” including the rights to privacy, abortion on demand and same-sex marriage.

Texas Republican Rep. Lamar Smith condemned the Supreme Court, saying that over the past 40 years, starting with its 1962 decision to end school prayer, it had conducted a methodical “assault on religion.”

“There are many right-thinking judges but there are many who are not right thinking and that’s where Congress has to step in,” he said.

The conference called on Congress to seek the impeachment and removal from office of “activist judges” and said lawmakers should reduce or eliminate funding for “activist courts” that take objectionable decisions.

Delegates also urged Senate Republicans to employ the ”nuclear option” that would prevent Democrats from using the procedural hurdle known as the filibuster to block judicial appointments.

Other speakers at the conference went well beyond DeLay in their rhetoric. Don Feder, a former columnist and media consultant, said judges were participating in a “well-orchestrated attack on our Judeo-Christian heritage.”