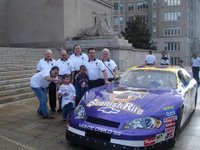 What do Budweiser, Jack Daniel's, Crown Royal and Chex Party Mix have in common with the Scottish Rite?

No, we're not talking about drunken parties. That's the Shriners.

The Scottish Rite has joined Bud, Jack, Crown, Chex and other companies as a NASCAR sponsor. The Scottish Rite announced on Saturday they have become the sponsor of Frank Cicci Racing's No. 34 Busch Series Chevrolet and driver Brian Conz, who is a Scottish Rite Mason.

"We are so excited and privileged to have such an honorable organization associated with us; we look forward to a long-lasting relationship with the Scottish Rite and Brian," team owner Frank Cicci said in a news release.

Brian Conz, 32°, is a member of Thomas Hughes Lodge No. 574, Livonia, Michigan, the Scottish Rite Valleys of Detroit, Michigan, N.M.J, and Charlotte, North Carolina, S.J., and is a Shriner in Detroit.

Financial terms of the sponsorship were not announced. A 2004 article on nascar.com reported that companies were paying around $10 million ($10,000,000.00) for a primary sponsorship that placed logos on the upper hood area, the quarter panels, part of the TV panel, and some of the B-post and deck lid.

"This isn't just about paying $10 million to put your logo on the hood of a car," said Roush Racing's Geoff Smith. "You have to realize that this goes beyond just the car — it includes uniforms, transporters and the rights to use the drivers for company marketing purposes."

"You have bought the car," said Smith.

Driver Bro. Brian Conz's official website is now adorned not only with the Scottish Rite Double Eagle symbol, but also with the Shriners' curved sword symbol and the well known Masonic Square and Compasses symbol.

Here's the press release from the Scottish Rite:

Washington, D.C., January 4, 2007 - The Scottish Rite Racing Team will be officially announced and introduced by NASCAR, BC Motorsports, and the Frank Cicci Racing team at the Scottish Rite House of the Temple on Saturday, January 6, 2007, at 11:00am. NASCAR representatives, the Racing Team, and members of the Masonic community will be available to the media. The House of the Temple is located at 1733 Sixteenth St. N.W., Washington, DC.

The Scottish Rite racecar will be driven by veteran driver Brian Conz, who himself is a 32° Scottish Rite Mason. Brother Brian, who began his career in 1988 in the Street Stock Division, later moved to the ARCA/REMAX Series in 1996. Brian has 15 wins, 79 top fives, and 108 top ten finishes to his credit and will be in the running for the Raybestos Rookie of the Year honors.

posted by Widow's Son at 1:29 PM links to this post

You know this has got to be the end, don't you?

Not the end, but we're getting close.

We'll know it's the end when we see Shriners on some kind of "reality" show.

Next on Fox: "Left, Rite?" A reality show in which seven various members of different Masonic jurisdictions (mainstream and unrecognized) share the same Palm Springs beach house for a month. Each week a new person is declared to be "clandestine" by audience voting.

In the first controversial episode, a Droite Humane member explains his philosophical views, while a Co-Mason shows off her tattoos. One of the PH members squares off with a "King Hiram" member, while the AF&AM members try to make sense of the argument.

Yes, that will be the end!

The Scottish Rite - 33 Degree's of Familiarization