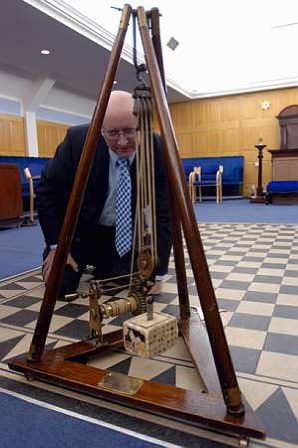 What is all the fuss about?

FOR hundreds of years it's been shrouded in mystery. With talk of secret handshakes, crafty symbols and fancy footwork, freemasonry has often been referred to as the world's largest secret society.

But as time has marched on into the 21st century, so have the freemasons.

And many lodges - which now prefer to be known merely as 'societies with secrets' - are throwing open their doors to non-members to show them what freemasonry is all about.

To prove their point, members of the Middleton Masonic Club on Manchester Old Road invited the Guardian down to see the place for ourselves and to learn more about one of the oldest institutions in the town.

Steve Briggs, chairman of the club, said: ôPeople always think we are very secretive, but that's not the case.

ôAfter the wars there was a change in society and people started to blame the freemasons for many things. So many of them stopped talking to people.

ôOver the years we've also moved into separate premises, instead of being out in the pubs and community, and this, along with a lack of communication and openness, is when you get all the conspiracy theories.

ôBut freemasonry has been modernised. The 21st century has seen a complete change and it has become a lot more open. Now lodges are encouraged to talk about what freemasonry is.ö

Freemasonry is described as a society of men concerned with moral and spiritual values who believe in a supreme being. Its members are taught its precepts by a series of ritual dramas, which follow ancient forms, and use stonemasons' customs and tools as allegorical guides in ceremonies.

And it's those ceremonies and rituals which most often form the basis of misconceptions about the freemasons.

Although what happens in the ceremonies themselves is not discussed, we were invited into the lodge room to see for ourselves the instruments used.

In the north-west and south west-corners of the floor are two globes representing day and night and heaven and earth and a piece of stonemasonry equipment sits directly in the west.

In the south-east and north-east corners are two stones called ashlar. One is rough and unprepared, a sign of the apprentices, while the other is smooth, representing the craftsmen.

Mr Briggs added: ôThere is the same progression in freemasonry as in stone masonry. You enter as an apprentice, learn certain secrets and become a fellow craftsman. and then become a master

ôThe rituals date back to the 12th and 13th centuries when people built the big cathedrals. There were people coming from all over claiming they were craftsman so a secret handshake began which was only known by the master mason to prove they were a master. It was a way of identifying yourself.ö

Freemasonry began in Middleton in 1805, when three townsmen visited the Imperial George Lodge number 92 in London.

Joseph Heap of Little park, William Summerskill of Hopwood Mill and Francis Berry of Market Place had all previously become freemasons at Oldham Lodge. At the meeting in London the men were made members of Imperial George Lodge and after Mr Heap was made master, it was decided to move the lodge to the Suffield Arms in Middleton.

The first meeting in Middleton was held in July 1805 and since then, freemasonry has had a huge presence in the town.

Roger Guest, another member of the lodge, added: ôThere is a lot of historical interest here in Middleton. After the church, freemasonry is probably the oldest continually existing institution in the town.ö

The lodge remained at the Suffield Arms for just one year, before moving to the Hare and Hounds for 33 years, the White Hart Inn for two years, The Black Bull for eight years and then The Assheton Arms from 1849 to 1927. Until 1920, the Imperial George Lodge was the only lodge in Middleton until Langley Lodge was consecrated in 1920.

From 1927, Imperial George Lodge and Langley Lodge both met at the Assembly Rooms until a permanent home was made with the founding of Middleton Masonic Club and over the years a number of notable Middleton men became members, including Middletonĺs first Mayor, Harvey Heywood and brewery boss, John William Lees.

Over the years the freemasons in Middleton have raised huge amounts for various charities and each year hold a giving evening where local charities are invited to receive donations. And many more lodges have also been created, with more than 300 members now meeting at the various lodges in Middleton.

Today, freemasonry in Middleton is very much a part of the community, with the conference facilities at the club being used by a wide range of people and annual nights held for non-masons to come along and find out more. If you want to find out more contact the club on 0161 643 2951, or email [email protected]