Odd Fellows: Remnants of Secret Society Pose a Mystery Across the U.S. 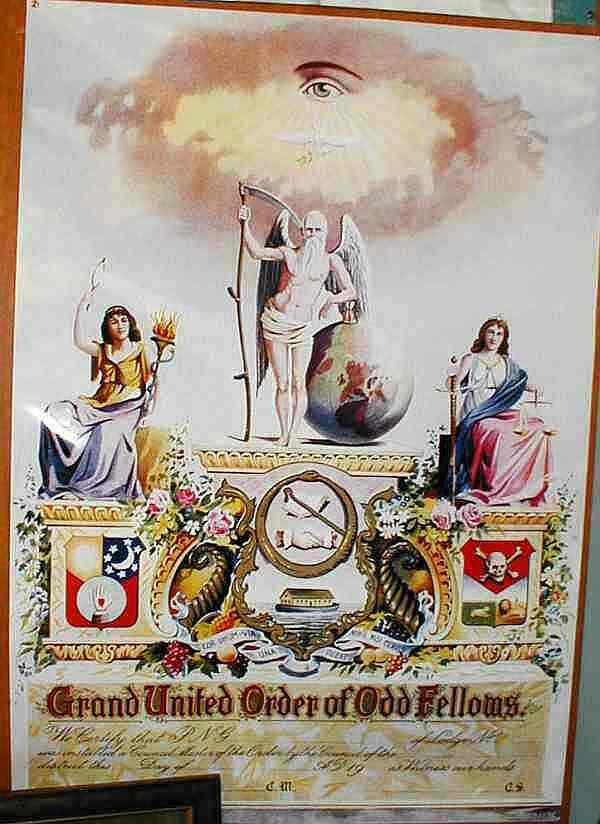 Warrenton, Va. -- Paul Wallace was alone, repairing overloaded circuits in the old red- brick building, when he discovered a tiny door to a dark recess between two walls.

Inside was a black wooden box. Curious, Wallace tugged it from its dark resting place. A white shroud appeared. Then leathery ribs. Then white candles.

"It was like a Dracula movie," Wallace said. "The top of the skull was covered, but you could see the rib cage and the sinew."

For a good 20 minutes, Wallace sat frozen. Finally, he returned the skeleton to its home between the walls of the Warrenton lodge of the Independent Order of Odd Fellows.

When police learned of Wallace's macabre discovery, they rushed to get a search warrant and seized the remains. State medical examiners are studying the bones. Around town, neighbors speculate about the identity of the corpse and why she was there. But perhaps the strangest thing about the mini-drama captivating this small town is that strikingly similar mysteries have played out across the country.

It turns out that skeletons like "Jane Doe Odd Fellow," as one officer calls her, reside in closets, drawers, attics and crawl spaces in Odd Fellows lodges nationwide. To members of the age-old fraternal order, the skeleton is a symbol of mortality, a treasured relic used in one of their most solemn and secret rituals: initiation.

But for many residents in the towns where the bones are found, the whole thing is just plain odd.

"A lot of people thought it was weird. They were like, 'What if it were my daughter?' " Wallace said.

"I just couldn't believe it," said Elaine Walters, who lived in an apartment below the lodge as a child. "You have visions of people stealing it from a grave in the 1700s."

As with many fraternal orders that compete with today's fast-paced lifestyles, interest in the Odd Fellows has waned, and many lodges have closed.

More and more of the skeletons are emerging from their hiding places -- often to the shock of the souls who come upon them. In recent years, the discovery of Odd Fellows skeletons has sparked police investigations in Missouri, Indiana, Pennsylvania and Nebraska. In Oklahoma, the remains prompted a work crew to flee in terror.

Last year, Jim Leuschke, a Missouri accountant active in theater, was offered two free caskets by a disbanding Odd Fellows lodge. Always on the lookout for interesting props, he picked up the ornate wooden coffins and pried one open to find a partial plaster skeleton.

Leuschke was unloading the coffins into his garage when the top of the second one jarred loose. What he saw wasn't plaster.

"I told the kids, 'Just keep it to yourselves. I don't want you telling anybody we've got skeletons in our garage,' " he said.

Leuschke eventually reported his find, and skeptical police officers showed up at his door. "No one could believe what we had there," he said.

Lisa Stone, a Chicago historian who has studied fraternal organizations, said one surprising part of the rituals is that the group has kept them secret for so long. The rituals are "not a booga-booga scary thing," but out of context, the skeletons are "frighteningly powerful objects," she said. She noted that many fraternal orders, including the Masons, use similar images.

Even the Warrenton police haven't been able to get the Odd Fellows to betray their order. Lt. Kerry White said members have cooperated -- but with one caveat. "They specifically asked us not to divulge what they told us," he said.

Odd Fellows Virginia Grand Lodge Secretary Jack Gibson Jr. bristles at the description of the organization's rituals. "I don't like the word 'secret,' " Gibson said. "It is a ceremony that is confined to the members, and if you're not a member, you don't discuss it."

Why so hush-hush? "It makes you different," Gibson said.

Wayne Colegrove, a longtime Odd Fellow from New York, still remembers his initiation more than 50 years ago. He hesitates to reveal too much but speaks of passwords and a skeleton that "wasn't to be seen by anybody until you take the degree."

"The words they say are something like, 'You're here, and pretty soon you're gone, and there's a hereafter,' " Colegrove said. "It's a lesson in life."

The Odd Fellows skeletons have popped up in costume shops and as decorations in bars. One made its way into a serial killer display at a New Orleans art gallery. Another made an appearance in the cult classic horror film "Dawn of the Dead."

The Independent Order of the Odd Fellows dates to 17th-century England as a charitable organization that worked to help families in need and buried their dead. The first American lodge opened in Baltimore in 1819.

The skeletons likely were purchased from scientific or fraternal supply companies. One catalog from the early 1900s advertised a "genuine, full-size selected specimen, set up and wired, fairly deodorized."

"Every one has a different story," said Randall Kremer, a spokesman at the Smithsonian Institution. "The companies would obtain skeletons from anywhere possible. They could be indigents. Or often people, especially at the higher levels of society, were anxious to donate their remains for scientific study."

So far, authorities have learned that the Warrenton remains are those of a Caucasian woman who stood about 5 feet 1. Her arms, feet and lower jaw are missing. She could have died from 10 to 150 years ago. Medical examiners studying the bones are consulting with anthropologists at the Smithsonian, police said.

Wallace, the electrician who revealed Jane Doe Odd Fellow, sees no harm in having her sent back to the hall. "It's not witchcraft. It's not satanic," Wallace said. "They do a lot of good works."

Still, he said, he hasn't stopped wondering where she came from.