The lucrative appointment was set up by Lord Leitch, the New Labour peer and former chief executive of Zurich.

Until 2004, he was head of the UK arm of the global giant and remains a close friend of Blair and his successor Gordon Brown.

He has also had a string of speaking engagements reportedly bringing in £500,000 and received a huge advance for his memoirs. The speed at which he has amassed a bulging portfolio after leaving No10 only last June astonished MPs.

The former premier has balanced his business appointments with unpaid roles as a Middle East envoy and adviser to Rwanda.

He is also lobbying to be the first full-time president of the European Union from next year, which will pay £200,000 a year. 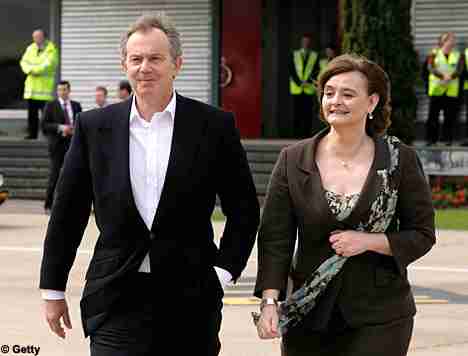 Insiders said he is making as much money as possible now in case he is given the role, which would force him to give up other commitments.

Mr Blair's office and Zurich refused to confirm how much he would receive. But a source said: "Tony does not pick up the phone or lift a pen for less than £1million."

The former PM will also advise Zurich on its climate initiative announced last week, which aims to develop products to tackle the growing risks of climate change.

He said: "What we need are the solutions to turn concern [about climate change] into action."

The company was unable to comment on how much time Mr Blair will spend working for the company, which has 58,000 staff and operates in 170 countries.

But Norman Baker, the campaigning Liberal Democrat MP, said: "Has the man no shame? It is a huge embarrassment for Britain to have a former Prime Minister hawking himself around with a big "For Sale" sign around his neck."

Mr Blair also receives £90,000 for office costs and a prime ministerial pension of £64,000, which will double when he hits retirement age.

Experts believe that in the next five years, he can expect to pocket double the £20million earned by former U.S. President Bill Clinton.

The cash will help Mr Blair and his wife Cherie pay off an estimated £5million in mortgages.

Mr Blaire is relying on a backroom deal between France and Germany to become Europe's first president.

But he has been told to expect resistance from Gordon Brown, who is said to be uneasy at having his rival taking charge in Brussels.

The former prime minister has been lobbying for nomination as the EU's £200,000-a-year figurehead.

At the World Economic Forum in Switzerland he told leaders he was ready to interrupt his business career to return to the political frontline.

He already has the support of French president Nicolas Sarkozy, who is his unofficial campaign manager. But he needs backing from Berlin to be sure of a deal.

German chancellor Angela Merkel is said to support him privately but faces opposition from Left-wing members of her coalition, who do not want to back a man they consider a warmonger.

Diplomats say Mr Sarkozy will play a key role in talking her round. Gaining her endorsement would amount to a done deal.

The pair are the EU's dominant players, with the clout to impose their will on key appointments.

But it would be a headache for Mr Brown. Tories have already taunted him over the prospect of seeing him welcome 'President Blair' to Downing Street.

The five-year presidential post comes into force from January next year. The leaders of the EU's 27 states will decide the appointment this year, but Mr Blair is emerging as the favourite.

Friends of Mr Brown warn it would be politically awkward to have the former prime minister in such a sensitive role. "It could be unbearable," one said. "Every statement by Brussels and London will be scrutinised for tensions between the two. Tony Blair is much keener on the EU than Brown and that would be seized on as a source of conflict."